May to accuse Corbyn of dragging Britain back to the 1970s 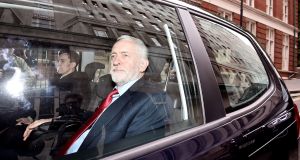 Jeremy Corbyn: defended Labour’s leaked manifesto, which promises to renationalise the railways, the Royal Mail and part of the energy market and to build 100,000 new council homes a year. Photograph: Hannah McKay/Reuters

Theresa May will on Friday accuse Jeremy Corbyn of seeking to drag Britain back to the 1970s and deserting “proud and patriotic working-class people” by turning his back on core Labour values. Campaigning in the north-east of England, a traditional Labour heartland, the prime minister will cite the leaking of Labour’s manifesto as evidence of Mr Corbyn’s poor leadership.

“Across the country today, traditional Labour supporters are increasingly looking at what Jeremy Corbyn believes in and are appalled. We have learned from the shambolic leak of his manifesto that at the heart of his plan is a desire to go back to the disastrous socialist policies of the 1970s. Labour voters are appalled because they see a leader who can’t lead,” she will say.

On Thursday, Mr Corbyn defended Labour’s manifesto, which was leaked to the media ahead of its launch next week, claiming that it could transform the lives of many in Britain. The most left-wing manifesto the party has presented for decades, it promises to renationalise the railways, the Royal Mail and part of the energy market and to build 100,000 new council homes a year.

As his political opponents condemned the plans as an economically illiterate throwback to the 1970s, Mr Corbyn’s shadow cabinet unanimously approved it.

“Our manifesto will be an offer and we believe the policies in it are very popular, an offer that will transform the lives of many people in our society, and ensure that we have a government in Britain on June 8th that will work for the many, not the few, and give everyone in our society a decent opportunity and a decent chance, so nobody’s ignored, nobody’s forgotten, and nobody’s left behind,” he said.

According to the leaked draft, Labour will promise billions of pounds in extra spending on health and social care, and to abolish zero-hours contracts, roll back cuts to social welfare benefits and scrap third-level tuition fees. There would be no rise in income tax on those earning less than £80,000 a year, but Labour would increase corporate tax and inheritance tax rates.

The party’s promises on housing are eye-catching, with a commitment to build 100,000 council and housing association houses each year by the end of the next Parliament. During the 13 years of Labour government under Tony Blair and Gordon Brown, the state built a total of 7,870 council houses.

On Brexit, the manifesto says that Labour accepts the result of last year’s referendum.

“We will scrap the Brexit white paper and make retaining benefits of single market and customs union negotiating priorities. We will guarantee rights of EU nationals living in [the] UK. We will reject any ‘no deal’ position and drop [the] great repeal bill, replacing it with [an] EU rights and protections bill to ensure no diminishing of workers’ rights, equality laws or consumer and environmental rights,” it says.

This is an extremely modern, progressive set of proposals. And it is looking to the long-term future

Labour’s shadow chancellor John McDonnell rejected comparisons with the party’s 1983 manifesto under Michael Foot, insisting that the new manifesto was a forward-looking document.

“This is an extremely modern, progressive set of proposals. And it is looking to the long-term future. And most people are extremely excited at what they’ve seen,” he said.

“It’s progressive. For example, if you look at the energy proposals, they are what a lot of modern European states have done over the last five years. So it is quite comprehensively modern . . . It’s a transformational programme. It will modernise our economy and it will ensure that everyone shares in the prosperity of the country.”

1 Martin ‘seriously concerned’ at Covid complacency amid pressure over church events
2 The far right rises: Its growth as a political force in Ireland
3 India set to overtake US as country worst hit by coronavirus
4 Golf group insist they adhered to public health guidelines during Tullamore trip
5 Ireland facing at least another year living with Covid-19 - Taoiseach
Real news has value SUBSCRIBE