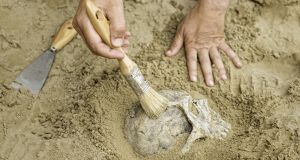 It is understood that the skull is believed to be male and there is no sign of trauma. File photograph: Getty

Gardaí investigating the discovery of a human skull near Midleton in east Cork are hoping that tests by pathologists and forensic anthropologists will shed some light on the remains.

Officers investigating the discovery of the skull in Roxboro near the old Midleton to Youghal railway line brought Assistant State Pathologist Margot Bolster to the scene on Wednesday and she examined the skull in situ.

It had been found buried in a metre-high mound of earth and rubbish just to the side of the rail line on Tuesday afternoon by workers carrying out clearance work for the proposed Midleton to Youghal Greenway.

The skull was also examined near the Shanty Bridge close to the old railway line by forensic anthropologist Dr Lorraine Buckley who is also attached to the State Pathologist’s Office and had travelled from Dublin.

The skull was removed from the scene to the morgue at Cork University Hospital where Dr Bolster will carry out a further examination on Thursday while Dr Buckley is also expected to carry out tests on the remains.

It’s understood that the skull is believed to be male and there is no sign of injury such as a fracture or bullet wound. But gardaí say they are keeping an open mind on what happened the person and how they came to be there.

It’s understood that Dr Bolster will also take DNA samples from the skull and they will be examined to see if they match any DNA samples in the Garda data base on missing persons.

How old could it be?

Gardaí were slow to speculate on how old the remains might be. But one source was cautious about the idea that it might as much as 100 years old, pointing out the Midleton-Youghal rail line only closed in 1987.

A garda source said the force has not discounted the possibility that the skull may have been unearthed elsewhere and brought there by a fox or some other predator as has been known to happen in rural areas.

“We really are keeping an open mind on this at this point . . . but we’re hoping the various tests will shed some light on matters.”

Gardaí continued a search of the general area surrounding the mound where the skull was found and discovered some other bones, but they believe these are more likely to be animal rather than human remains.

The area remains preserved and garda technical experts are expected to continue examining the scene on Thursday and possibly beyond as they try to unravel the mystery.