Cold snap set to continue into weekend, with lows of -5 and ‘severe frost’ on Friday night 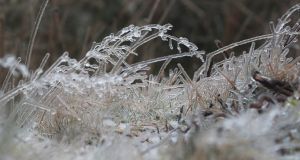 Two yellow weather warnings are in place across the country for Thursday morning as snow and ice will lead to “treacherous conditions”, Met Éireann has forecast.

The meteorological service issued a snow and ice warning from Wednesday evening until 11am on Thursday. Meanwhile, a low temperature warning will be in place from 11pm on Wednesday until 10am on Thursday.

Some snow accumulations were predicted for Thursday morning, with a band of rain, sleet and snow clearing southwards to make way for sunny spells in the afternoon. The UK Met Office also warned that snow and ice would potentially create difficult travel conditions.

Fallstreak hole spotted by a member of staff, Dónal Black. Photo taken today near Santry, Co. Dublin. It happens when the supercooled water droplets in the cloud freeze and form ice crystals that become too heavy and fall out of the cloud leaving a hole. https://t.co/1A0KBVGAgZ pic.twitter.com/g0m7mFU2Ec

Met Éireann forecaster Andrew Doran-Sherlock said any accumulations of snow would be fragmented across the country, with no particular area getting a blanket covering. Thursday night will be largely dry, apart from a few wintry showers mainly in parts of Leinster and east Ulster. Temperatures could drop to -2, bringing widespread frost and icy patches as moderate northwestern winds sweep in.

The cold snap is set to continue into the weekend, with lows of -5 and a “widespread severe frost” forming on Friday night. Met Éireann said the cold conditions would ease over the weekend, with temperatures of 5-8 degrees expected by Sunday.

Met Éireann is continuing to monitor a weakened stratospheric polar vortex that could lead to colder conditions in Ireland over the coming weeks. If further disrupted, the vortex of cold air high up in the stratosphere over the Arctic could develop into what is known as a sudden stratospheric warming event.

Each of these events is different, with fewer than half causing colder conditions in Ireland, according to Met Éireann climatologist Paul Moore. The February 2018 sudden stratospheric warming event ushered in Storm Emma and the so-called Beast from the East, while Ireland was largely unaffected by a similar event in January 2019.