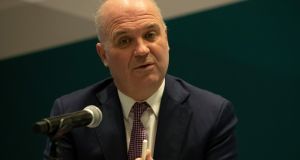 Chief Medical Officer Dr Tony Holohan told the Government that while primary and secondary schools remained “safe environments” in relation to Covid-19 there were too many risks associated with children being dropped off and picked up from schools.

In his formal letter to Government on behalf of the National Public Health Emergency Team (Nphet), Dr Holohan assessed that the movement of an estimated one million people on a daily basis to and from schools was a “significant additional risk”.

The letter said that the experience of the second wave which occurred in autumn has “clearly demonstrated that schools are in themselves a safe environment”.

However, Dr Holohan continued: “The current epidemiological situation has deteriorated to a point where the significant levels of mobility and linked activity that the full reopening of schools would generate, constitutes a very significant additional risk in the context of what are already unprecedented levels of disease transmissions in the community.”

He said the “safe” assessment of schools still remain but the recommendation reflected the deteriorating epidemiological situation and the “absolute need to reduce all opportunities for transmission”. This included the mobility and social mixing between adults associated with school drop-offs and pick-ups.

The CMO’s letter largely focused on education, which is the sector the Government has been most determined to keep open following the closure of schools in the early stages of the pandemic.

It finds that case levels among the under 13 cohort still remains very low compared to other age groups, and that the incidence among the 13 to 18 cohort has remained close to the average since the autumn.

In addition, the letter noted there had been a two-fold increase in the number of Covid-related hospital admissions, with the number of patients in intensive care units doubling from 37 to 75.

In a discussion on the new UK variant of the disease, the letter states is is an “emerging concern”.

It confirms a rapid rise in the percentage of cases associated with this new strain. Before Christmas, the UK variant was diagnosed in less than 9 per cent of a small sample of Irish cases (70). By the first week of January, 25 per cent of 189 samples tested showed the UK variant.

Dr Holohan noted the overall situation is “expected to deteriorate further in the coming days, given the known time pages associated with the impact of measures”.

While not specifically recommending the retention of the travel ban, the letter says that the measures in place should be “as strong as possible in relation to travel, particularly with the United Kingdom and South Africa”.