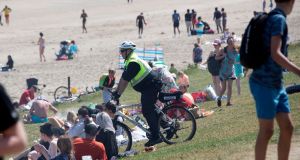 A garda patrols Portmarnock Beach on Thursday. Over the weekend, gardaí focused its operations on dispersing crowds at a number of beaches and beauty spots as large numbers gathered in coastal areas to enjoyed the sunshine. Photograph: Colin Keegan/ Collins Dublin

The National Public Health Emergency Team (NPHET) has reported one further death from Covid-19 in its latest statement, bringing the total number of coronavirus-related deaths in the Republic to 1,650.

The death toll has decreased from previous reports by the NPHET as validation of data has resulted in the denotification of three deaths. The figure of 1,650 deaths reflects this.

Meanwhile, a leading expert has warned house parties being held around Ireland are a “disaster” for efforts to contain the spread of coronavirus.

“Indoor house parties are a disaster for this,” he said.

“Whereas being outdoors in the open air, even if you had 500 people on a beach, is relatively safe. The sun kills it and the wind blows it away.”

On Sunday, more than 60 residents living near University College Cork held a silent protest against what they claim are breaches of Covid-19 restrictions by students holding parties in rented accommodation.

Gardaí have reported a large increase in house parties in recent weeks despite the ongoing lockdown.

Over the weekend, gardaí focused its operations on dispersing crowds at a number of beaches and beauty spots as large numbers gathered in coastal areas to enjoyed the sunshine.

Large groups at the Forty Foot swimming location in south Dublin were moved on, while the Bull Wall bridge was closed to cars to stem the numbers gathering on Dollymount beach.

Beaches in counties Cork, Kerry, Donegal and Louth were also closed due to the size of crowds gathering there.

Prof McConkey said while the declining number of new cases of coronavirus was “very heartening”, more clarity would be helpful on the proportion that came about through “unexplained community transmission”.

If it was significant, it would be “very worrying because if would mean there is still uncontrolled spread of the virus, [and] that we haven’t got knowledge of the trains of transmission well enough yet”.

The scale of unexplained community transmission should determine any further easing of the restrictions, he told RTÉ’s Morning Ireland.

“If we relax restrictions when there are still, say, 20 or 30 cases of community transmission, we know that . . . over five days it will double, and then that means over 50 days it will rise exponentially, a thousand-fold,” he said.

“We need to get those unexplained community transmissions down essentially to zero so we are on top of this virus, in control over every little chain of transmission in Ireland.”

Prof McConkey also suggested some regions in the Republic could lift restrictions earlier than others.

“What I’m worried about is if we start widespread travel all over Ireland then many of the counties that already have no transmission and no new cases each day – which are mostly out in the west of Ireland – will end up with reintroduction of this back into those counties,” he said.

Regional variations in lockdown measures have happened in other countries.

“The idea of our country having different regions with different restrictions is very sensible,” Prof McConkey said.

The infectious diseases expert said more could also be done on getting children back to schools and creches.

Citing the Danish success in bringing children back in pods of five, Prof McConkey said school children in the Republic could return to class and childcare “fairly soon”.

“My view is that it is quite important that they go back before September, because if we just push it down the road to September then we’ll have to phase it in . . . and it will be November or December before all the children are back at school, and I see that as very destructive,” he said.

“So I think getting children back in June or August would be a great idea.”

Dr Gabriel Scally, a public health expert, said the country was making “great progress” in stemming to spread of the virus but he remained “worried” about efforts to contain it in the UK and people travelling there through the Republic to evade quarantine.

On calls to hasten the easing of restrictions, Dr Scally said “waiting and seeing how it looks like in phase two would be a very wise thing to do”.

“It is such a dangerous virus and we don’t want to undo everything that has been done so far,” he told Newstalk.

Dr Scally also supported maintaining a two-metre social distancing guideline, despite calls from business and others to reduce it to one metre, which the World Health Organisation considers safe.

“I believe in holding tight to that because the risk increases pretty dramatically when you go to one metre,” he said. “Obviously if the number of cases is very very low that can be looked at again.”

Meanwhile, a survey shows high levels of people who remain uncomfortable with returning to everyday activities like going to the cinema, travelling on public transport or even shopping.

The EY Future Consumer Index, which tracks consumer sentiment, found 78 per cent of people would be uncomfortable going to the cinema, 76 per cent with exercising in a gym and 74 per cent going to a bar.

Almost three out of every four people polled feel uncomfortable about travelling on public transport, while a majority of respondents also remain uncomfortable with the prospect of eating in restaurants, trying on clothes in a shop or going to a hairdresser.