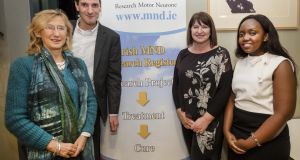 Funds raised to help Connemara-based computer programmer Andrew Lydon who died of motor neurone disease are to be used to support research into the devastating condition.

Lydon died last December, and money raised to provide homecare for him could not be used. It will instead go to support research into the progressive neurodegenerative condition at Trinity College Dublin (TCD).

“Andrew was a brilliant computer programmer, and I had many long discussions with him about computers, coding and technology as he participated in our brain-imaging studies,” Prof Peter Bede of TCD’s academic unit of neurology said.

Lydon’s wife Sally, children Molly and Seosamh, and Mary Lynch McDonagh of the Andrew Lydon Trust joined Prof Bede and Prof Orla Hardiman, the unit’s head, at an event in TCD on Friday to announce the four-year scholarship.

One person is diagnosed every two days in Ireland with the condition, which is associated with progressive loss of all voluntary movements and has no cure.

Lydon, a father of two who would have been 48 on Saturday, was diagnosed in 2010. He developed breathing problems by 2015 which required invasive mechanical ventilation.

In April 2016, he had a tracheotomy at University Hospital, Galway, and hoped to return home if a 24-hour homecare package could be approved.

His family, friends and wider community in An Cheatru Rua, Galway, set up a trust fund to help finance this.

Ms Lynch McDonagh says that people from “Barna to Carna” supported raffles, coffee and tea mornings , and the total amount reached over €150,000.

“Andrew received wonderful care in UHG’s high-dependency unit, Sally was with him every day, and he had really hoped to be able to come home. But sadly it didn’t happen,”she says.

Dr Rangariroyashe Chipika, recipient of the scholarship, will pursue a PhD which focuses on changes in brain imaging and signal analysis in motor neurone disease.

She said she was “truly honoured to conduct my research in the name of Andrew Lydon”.

“Finding new ways to measure the changes that occur in the brains of those with motor neurone disease will help us to find new and better treatments,” she said.

The trust fund also donated more than €8,000 to the Irish Motor Neurone Disease Association to help finance equipment for others with the condition.

“Andrew was a truly special person,” Prof Bede said, and it was fitting that the scholarship would focus on computational analysis of imaging signals.

More than 35 researchers at the TCD unit are working on all aspects of motor neurone disease from genomics through to neuroimaging, psychology, health services research and drug development.