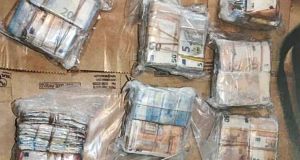 A camper van searched by the Garda was found to contain about €600,000 in cash while more than €800,000 was found in the attic of a house in west Dublin in the same operation over the weekend.

In total just over €1.7 million in cash was found in three tranches and gardaí believe most of the money was owned by the Kinahan cartel.

However, some of the cash has been linked to another criminal gang, comprised of members of the Traveller community.

Most of the money was vacuum packed and gardaí believe it was being readied to be taken out of the country.

Files on the suspects’ alleged role in the money collection and laundering enterprise is to be sent to the DPP.

The operation began in Co Wexford on Saturday when a Dubliner and a Scottish national were detained on the street.

The Irish man was the key target of the Garda operation.

Gardaí moved in on him on Saturday on Clonard Road, Wexford town, just before 11am when the surveillance operation spotted the handover of the holdalls containing cash.

The Irish and Scottish suspects at the scene were detained. Gardaí then searched the home in Ballyfermot of one of the men arrested in Wexford.

More money was found in the attic, with the camper van in Wexford yielding a third consignment of cash.

So much cash was discovered that it was several hours before gardaí could weigh and count it and put a figure on it.

The operation was led by the Garda’s Drugs and Organised Crime Bureau.

It has now seized more than €8 million in cash since it was launched as a new unit back in 2015.

Garda sources said the arrests and seizure of the money over the weekend represented a very significant blow to the Kinahan cartel and those who work for them in Ireland.

“This quantity of money is the end result of a lot of work by these people; sourcing drugs, importing them into the country and then selling them all over the country and collecting the cash back in,” said one source.

“A lot of risk and a lot of time goes into all of that. And for us to come along and take the money off them after all that effort; that kills these people and it damages them.”

The three suspects arrested in Wexford re aged 47, 38 and 29 years.They were detained on suspicion of money laundering.Another man, aged 44 years, was arrested after further searches in Wexford town later on Saturday. On Sunday, a fifth suspect, a woman aged 39, was arrested and she was also being questioned in Wexford Garda station.

Two men are due to appear at Wexford District Court on Monday morning, charged in relation to the seizure of the monies in Dublin and Wexford. A third man and a woman were released without charge and a file sent to the Director of Public Prosecutions.