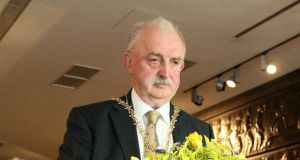 Image from April 2011 of former lord mayor of Belfast Ian Adamson, who has died at the age of 74. File photograph: Paul Faith/PA Wire

President Michael D Higgins was among those to pay tribute to Dr Adamson, describing him as a friend and a respected scholar, as well as a supporter of “countless organisations that served to celebrate and protect our common heritage”.

Originally from Bangor, Co Down, Dr Adamson was elected lord mayor of Belfast in 1996, having previously served as deputy mayor. He was also a Belfast city councillor from 1989 to 2011.

A community doctor and a noted enthusiast of anthropology, he once remarked on his love of “meeting people from different countries and cultures”.

At the time of his election as mayor, he said he would be “very prepared” to see a nationalist in the position.

“Dr Adamson never ceased to remind us that we are all but migrants in time, and his scholarship highlighted our shared history, shared identities, shared vulnerabilities and migratory roots,” Mr Higgins said following news of Dr Adamson’s death on Wednesday.

“His legacy consists not only of his academic work but also of his calls to courage and his practical solidarity with those most vulnerable. He consistently pointed to education as a key tool to overcome fear of the unknown and fear of the other.”

“He made a huge contribution to cultural and political life and will be greatly missed by his many colleagues and friends,” he said.

The Northern Ireland First World War Centenary Committee, which counted Dr Adamson as a founding member, described him as “a true trailblazer and frontiersman”, a committed Ulster Scot and an Irish-speaking historian.

Dr Adamson was the author of several books, including The Cruthin: A History of the Ulster Land and People, as well as The Ulster People: Ancient, Medieval, and Modern.