Mother-of-two (28) was a caring person who always put others first, mourners told 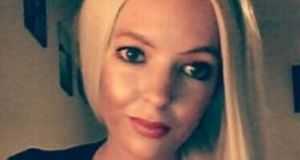 Jasmine was a good mother who had a very special relationship with her children, her funeral was told

Mother-of-two Jasmine McMonagle was buried alongside her beloved grandmother Rose in her native Co Donegal on Monday.

Mourners at St Mary’s Church in Castlefinn were told she was such a caring person who always put others first. Hundreds walked the short distance to the nearby graveyard to say a final farewell to the 28-year-old who was found dead at her home in Killygordon on Friday.

Fr Oliver Crilly said it was fitting that Jasmine would now be laid to rest alongside her grandmother Rose whom she loved so much.

Fr Crilly said he had spent some time with the family at their home in Castlefinn and it was clear that they were very close.

He said death was difficult at any time but at this time and in such circumstances was even more difficult.

“But bereavement around Christmas time is harder. Bereavement associated with cruel trauma is the hardest of all,” he said.

Jasmine was a good mother who had a very special relationship with her children Skye (7) and Luna (1), Fr Crilly said. “She loved to give, she spoilt her wee brother Christopher when he was young and even now when he was 22 years old,” he said.

Mourners were told Jasmine had her own style and like to keep up with fashion trends but also created her own trends which made her stand out from the crowd.

Fr Crilly said Jasmine, who had done some modelling, always presented herself well. “She didn’t just follow the fashions. She loved to be different, to be herself.”

Family was very always important to Jasmine and her family “have been very impressive during these dark days”, the priest said.

“And they have been buoyed up by the support and response of the local community.”

He added that like her mother, Jasmine liked to study people and their behaviour and thought that she one day would also like to be a private detective.

Among those who mourned Jasmine were her mother Jacqueline, sister Jenna, brother Christopher as well as her daughters and a wide circle of family and close friends.

A printed copy of the poem which Jasmine wrote for her late grandmother as well as a picture of her two children were among the items brought to the altar as offertory gifts.

A friend also read a small poem written by Jasmine’s brother Christopher in which he warned her not to visit Kentucky Fried Chicken too much.

As Jasmine’s coffin was led from the church for burial, one of her favourite songs ‘Ain’t No Mountain High Enough’ by Marvin Gaye and Tammi Terrell, was played from the church’s speaker system.

On Saturday, Richard Burke appeared in court in Sligo charged with her murder. Det Sgt Michael Galvin told the court that when he arrested Mr Burke, of Forest Park, Killygordon, the accused replied: “I understand everything.”