Thought which counts: Cost of Varadkar’s gifts to foreign dignitaries

Green jersey at €60 a pop a staple of diplomacy with cufflinks, books and Celtic brooch 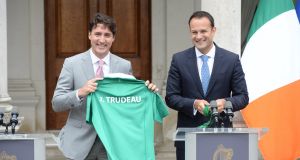 Prime minister of Canada Justin Trudeau with his present from Taoiseach Leo Varadkar, whose department spent €6,649.17 on VIP gifts in the 11-and-a-half months to mid-December 2018. Photograph: Dara Mac Donaill

Charles Haughey famously gave Margaret Thatcher a teapot, Enda Kenny liked to hand out books of poems but for Taoiseach Leo Varadkar sporting paraphernalia appears to be the go-to gift for foreign dignitaries.

A breakdown of spending from Mr Varadkar’s department shows a spend on VIP gifts of €6,649.17 in the 11½ months to mid-December. Some €323.70 of the total was spent on various types of sports jerseys.

Donald Trump’s son, Barron, got an Irish football jersey from Mr Varadkar which cost €49 while the US president himself got a book on Irish golf courses.

I'm the first Taoiseach to travel to Bulgaria in 13 years. I took the opportunity to give Prime Minister @BoykoBorissov his very own Dublin jersey 👕 pic.twitter.com/H8wfGrjt3v

The Taoiseach came under fire last March for claiming in Washington that he helped Mr Trump overcome a planning issue when he bought Doonbeg golf course when Mr Varadkar was minister for tourism.

The book – 18 Greatest Irish Golf Courses – costing €19.99 was among the gifts purchased by the Department of An Taoiseach for the annual St Patrick’s Day visit to the US, documents released under the Freedom of Information Act show. Mr Trump also received a sliotar (€10), while the traditional shamrock bowl presented to the US president cost €262.

Other gifts purchased for the St Patrick’s Day visit included a Newbridge Tulip Tealight Stand for €45.50 and a Newbridge Celtic Brooch for €35.50.

Belgian prime minister Charles Michel was presented with a bottle of Móinéir Irish wine which cost €65, while the first minister of Wales, Carwyn Howell Jones, was given a bottle of Teeling Whiskey which cost €100.

In December, the department purchased 295 pairs of cufflinks with the Government buildings logo for “protocol gift stock” for a total of €2,473.84.

Throughout the year, the department also bought numerous sets of cufflinks for protocol gift stock ranging from “Celtic knot” to “round spiral” design for €1,040.