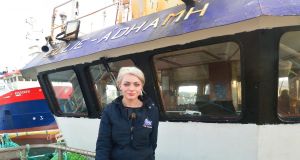 Dinah Busher: ‘If there isn’t a deal done to allow us to continue to fish in UK waters, then that’s all off limits to us and we’re losing out on five months of income.’ Photograph: Niall Duffy/West Cork Photo

The sky is an azure blue above Hungry Hill and a bright, silvery sun dances on the glass-like waters of Castletownbere Harbour, but the serene setting belies worrying and stormy times ahead.

Fisheries has moved centre-stage in the increasingly urgent EU-UK Brexit deal talks, and west Cork and Castletownbere could be at the centre of battles that lie ahead.

Last week, EU chief negotiator, Michel Barnier offered the UK a deal that would see the value of between 15 per cent and 18 per cent of the €650 million worth of fish caught by EU fleets in British waters handed back to the UK.

Rejecting it immediately, British cabinet minister, Michael Gove told Sky News: “The EU still wants to take the lion’s share of the fish in our waters, which is just not fair given we are leaving the EU.”

'Our turnover is over €60 million and we’re just one operator, so the industry turnover in Castletown would be over €100 million'

Unfortunately, as Taoiseach Micheál Martin said last week, fishing has become a totemic issue for Britain, one linked to its views of its own sovereignty and its control of waters.

It was a point he made directly to British prime minister Boris Johnson: “This idea of dividing lines across the seas and saying, ‘This is our fish and that’s your fish’ – I mean, the seas don’t operate like that,” he said.

West Cork’s rugged beauty may be far removed from the steel and glass world of Brussels bureaucracy, but the negotiations there and in London are being watched closely in Castletownbere and in other Irish fishing ports.

Ninety five per cent of the Beara Peninsula’s economy depends on fishing, says John Nolan, managing director of Castletownbere Fishermens’ Co-Op, which employs 120 people directly, while the co-op’s 64 boats another 340 more at sea.

“Our turnover is over €60 million and we’re just one operator, so the industry turnover in Castletown would be over €100 million. Our wage bill ashore would be around €1.25 million but our wage bill with the fleet would be up around €10 million. Fishing is what keeps Beara going,” he said.

Nolan’s claims are supported by a 2010 Bord Iascaigh Mhara report on the importance of the sea for Castletownbere and surrounding areas. In the end, it concluded that 81 per cent of everything that happens in the town depends on the sea.

Despite consolidation and fleet reduction seen elsewhere, Castletownbere has maintained its numbers, leaving it, in October 2020, as the State’s second biggest fishing port after Killybegs and, the largest white fish fishing port. Each €1 million worth of fish land generates €2.2 million on land.

Killybegs is primarily a pelagic fishing port. In Irish terms, this means mackerel and herring. In Castletownbere, the focus is on demersal or white fish such as hake, cod, haddock, plaice, sole, monkfish and megrim. All of which command higher prices.

So, while the 235,085 tonnes of mostly pelagic fish landed in Killybegs up to October were worth €108 million, Castletownbere’s far smaller haul of 34,613 tonnes – including 26,562 tonnes of whitefish was worth nearly €106 million.

Given the importance of fishing to Beara, it is little wonder that Nolan and fishermen like Damian Turner of the Irish South and West Fishermen’s Producer Organisation are anxiously looking towards Brussels and London.

Expressing scepticism that Boris Johnson sees fisheries as some latter-day totemic Britannia battle, Nolan points to the history of the Common Fisheries Policy (CFP), the issue of quotas and how they were allocated in the beginning, and now.

Looking to a map on his office door, Nolan points out the plethora of the Roman numeral-marked symbols that sets out fishing areas, the types of species, and the quantities of them that can be captured

The Common Fisheries Policy sets quotas ever year, or every two years for each species in fishing areas designated by the International Council for the Exploration of the Seas. Each state is given a quota based upon the Total Allowable Catch and its traditional share of that.

“The one thing that we have that is good here in Ireland is that the Irish quotas belong to the Irish people – you get an allocation off the government on a monthly basis for some species, seasonally for others, but you don’t own the quota, it is retained by the Irish people.

“In the UK in contrast, you own the quota so if I’ve a fishing boat, I can turn around and sell the quota and sell it as a business to the Norwegians or the Dutch and a huge amount of British quota is now controlled by the Norwegians and the Dutch, particularly when it comes to mackerel.”

'Even if a deal is done, where is Barnier getting his €117 million of fish that he is offering to the UK'

The British may say that they have been wronged by the EU over the amount of fishing waters they have been given under the CFP, but the only place where they genuinely have a complaint is along the South coast of England where they compete with the French.

“Boris has nailed his colours to mast on fishing and has been very jingoistic about it, talking about ‘Taking back our waters’ but the reality is that for the last 20 years, British fishermen have been selling their quotas out the backdoor to anyone with a cheque book.”

Within the EU, prior to Britain’s departure, the UK controlled the largest amount of fishing waters with its Exclusive Economic Zone (EEZ) covering some 743,965 sq kms followed by Spain with 560,957 sq kms, Ireland with 425,346 sq kms and France with 344,395 sq kms.

The British EEZ extends north, to off the Norwegian coast, down the North Sea, tapering to half way across the English Channel and down to the Channel Islands and then back up the Irish Sea before looping around Northern Ireland, extending 200 miles west of Scotland.

The area includes many rich fishing grounds in both the Irish Sea and the Celtic Sea such as the Labardie Bank, the Jones Bank and the Smalls as well as fishing grounds off Rockall, all of which are fished by Irish trawlers for whitefish, pelagics or shellfish.

Chairman of the Irish South and West Fisherman’s Organisation, Damian Turner, who targets white fish in his trawler, Roise Caitríona, is worried, too, that a talks collapse could see Irish boats blocked from fishing in UK waters.

His concerns are twofold - not only will Irish boats no longer have full access to rich fishing grounds like Labardie and the Smalls, which Ireland shares with the UK, they will now face added competition from Spanish and French boats which will also be displaced and are likely to look to Irish waters for fish.

“The UK has about 30 per cent of EU fishing opportunities but if it leaves without a fishing deal, the Irish zone will then hold the majority of fish available to be caught by the EU fleet so Ireland will have lost out on what we take from UK waters and our waters will become the target for other EU boats.”

Turner says that in such a scenario where displaced Spanish and French trawlers start fishing in areas like the Porcupine Bank some 180km off the West coast, the number of such vessels would have to be limited to ensure stocks can be protected.

“Even if a deal is done, where is Barnier getting his €117 million of fish that he is offering to the UK – it’s paper fish – nobody knows if the fish are going to be in UK waters – fish don’t recognise borders – what’s in UK waters today could be in Irish waters next week or vice versa.”

Pierside, Turner’s thoughts on displacement are echoed by local skipper Ross Minihane, who with his father and brother, employ 50 crew on their four boats, the Alannah Reilly, the Dawn Ross, the Sarah David and Ocean Venture II.

“This year with the Alannah Reilly, we would have spent five months fishing in English waters. We would have spent three months on the Jones Bank 40 miles from the Scilly Isles. It’s good prawn ground but we are only going there because we don’t have enough prawn quota here.

“There are plenty of prawns in the Porcupine Bank off the west coast but we haven’t been given enough quota there for years – instead we have to go into UK waters which now accounts for 40per cent of the income of the boat and if we are displaced from UK waters, we lose that income.”

Dinah Busher from Kilmore Quay in Wexford has disembarked from her family’s boat, the Ellie Adhamh and she nods in agreement as she tells how she too fishes for prawn in the Labardie Bank – shared by Ireland and the UK – because she hasn’t enough quota in the Porcupine.

“We fish for prawn in the Labardie and we also fish for cuttlefish – cuttlefish is a member of the squid family like octopus but it’s not governed by quota – and we fish for the cuttlefish in UK waters - we spend five months based in the UK, operating out of Plymouth or Brixham in Devon.

“But if there isn’t a deal done to allow us to continue to fish in UK waters, then that’s all off limits to us and we’re losing out on five months of income – fishing is tough enough as it – the price of prawn has fallen because Covid has closed all the restaurants in Europe so demand dropped hugely.

Ross agrees and says the solution is simple: “We fish around Rockall for squid, which like cuttlefish isn’t governed by quotas, but to get there we have to steam through monk and megrim fishing grounds and see French and Spanish boats fishing for them when we don’t have quota for them.

“There is plenty of fishing Irish waters if the EU gives us the quota – we shouldn’t be begging to go to someone else’s waters – we have the richest fishing grounds in the world but we’re not being given enough quota in our own waters – that’s the only reason we’re fishing in UK waters.”