Cold, frost and icy stretches forecast for rest of week

Yellow snow and ice warning in place for Donegal; Thursday to be bitterly cold 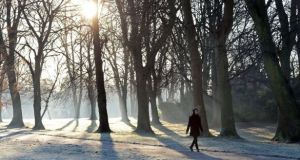 Thursday night is expected to be very cold with severe frost in most places. File photograph: Eric Luke/The Irish Times

A snow and ice warning is in place for parts of the north of the country on Thursday. A yellow warning was issued for Co Donegal on Wednesday and is in place until midnight with reduced visibility likely in areas.

A similar warning was in place until 8am this morning for counties Antrim, Fermanagh, Tyrone and Derry.

Met Éireann has also warned that it will be “much colder” across the country for the rest of the week, with sharp to severe frosts, icy stretches and some wintry showers.

Thursday is due to be a bitterly cold day with widespread showers early on along with isolated thunderstorms. Showers will gradually become confined to Atlantic counties, with spells of sunshine developing elsewhere. Highest temperatures will be between just two and five degrees.

Thursday night is expected to be very cold with severe frost in most places. Lowest temperatures will be between zero and minus three degrees.

There will be widespread frost to begin with on Friday with some icy stretches on untreated surfaces. Many areas will stay dry for the day with spells of winter sunshine.

However, northwest winds will be brisk with an added wind chill factor. A few coastal showers will persist too, mainly in the north and northwest with isolated hail and thunderstorms.

Highest temperatures will be between four and seven degrees.

Friday night will bring scattered rain and local hail showers, with some sleet on higher ground. Lowest temperatures will be between zero and four degrees.

Saturday will bring further scattered showers with some sunshine developing later in the day. Winds will be moderate with highest temperatures between five and eight degrees.

There will be some lingering showers in eastern coastal areas overnight but most areas will be dry with clear skies. Lowest temperatures will be between minus three and three degrees.

Sunday is expected to be a largely dry day with a light northerly breeze and plenty of sunshine. There may be some showers, with eastern fringes most at threat. Highest temperatures will be between three and seven degrees.