Latest reports ‘spell out how close we are to climate catastrophe’, says António Guterres 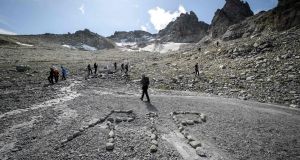 A ceremony to mark the ‘death’ of the Pizol glacier above Mels, eastern Switzerland. Photograph: Fabrice Coffrini/AFP via Getty

The world is “headed for a thundering temperature rise of 3-5 degrees this century”, United Nations secretary general António Guterres has predicted.

In a “State of the Planet” address delivered at Columbia University in New York on Wednesday Mr Guterres said “apocalyptic fires and floods, cyclones and hurricanes are increasingly the new normal” – and caused by the rapidly unfolding climate emergency.

In addition the planet was witnessing “a devastating pandemic, new heights of global heating, new lows of ecological degradation and new setbacks in our work towards global goals for more equitable, inclusive and sustainable development”.

“To put it simply, the state of the planet is broken,” he said.

Humanity was continuing to wage war on nature but this would not be without consequences, he added. “This is suicidal. Nature always strikes back – and it is already doing so with growing force and fury. Biodiversity is collapsing. One million species are at risk of extinction. Ecosystems are disappearing before our eyes. Deserts are spreading. Wetlands are being lost. Every year, we lose 10 million hectares of forests.”

His speech was flagged by the UN as an attempt to secure greater commitments from governments on climate action in advance of a UN summit on December 12th, coinciding with the fifth anniversary of the Paris agreement.

The secretary general described how “oceans are overfished – and choking with plastic waste. The carbon dioxide they absorb is acidifying the seas. Coral reefs are bleached and dying.”

He said air and water pollution were killing nine million people annually; more than six times the current toll of Covid-19. “And with people and livestock encroaching further into animal habitats and disrupting wild spaces, we could see more viruses and other disease-causing agents jump from animals to humans ... 75 per cent of new and emerging human infectious diseases are zoonotic.”

The latest reports from World Meteorological Organization and the UN Environment Programme – also published on Wednesday – “spell out how close we are to climate catastrophe”, he warned.

“The science is crystal clear: to limit temperature rise to 1.5 degrees above pre-industrial levels, the world needs to decrease fossil fuel production by roughly 6 per cent every year between now and 2030. Instead the world is going in the opposite direction; planning an annual increase of 2 per cent,” he noted.

He said, nonetheless, there was cause for some hope. “The EU has committed to become the first climate neutral continent by 2050 – and I expect it will decide to reduce its emissions to at least 55 per cent below 1990 levels by 2030. Japan, the Republic of Korea and more than 110 countries have committed to carbon neutrality by 2050.”

The future US administration has announced the same goal, while China has committed to get there before 2060. “This means that by early next year, countries representing more than 65 per cent of global carbon-dioxide emissions and more than 70 per cent of the world economy will have made ambitious commitments to carbon neutrality.”

National climate policies, however, had yet to rise to the challenge, he said. Emissions were 62 per cent higher today than when international climate negotiations began in 1990. “Every tenth of a degree of warming matters. Today, we are at 1.2 degrees of warming and already witnessing unprecedented climate extremes and volatility in every region and on every continent.”

Mr Guterres said the fallout of the assault on the planet was impeding efforts to eliminate poverty and imperilling food security. “And it is making our work for peace even more difficult, as the disruptions drive instability, displacement and conflict.”

He expressed concern about impacts on polar regions. Arctic sea ice in October was the lowest on record – “and now refreezing has been the slowest on record. Greenland ice has continued its long-term decline, losing an average of 278 gigatons a year. Permafrost is melting and releasing methane – a potent greenhouse gas.”

In 2020, CO2 levels continued their upward trend despite the pandemic; methane soared even higher while nitrous oxide, a powerful greenhouse gas, escalated by 123 per cent.

“Human activities are at the root of our descent toward chaos,” he stated, but that meant human action could help solve it. “Making peace with nature is the defining task of the 21st century. It must be the top, top priority for everyone, everywhere.”

Covid recovery and repair of the planet could be be two sides of the same coin, he said. In addressing the climate crisis the world needed to achieve global carbon neutrality by 2050; to align global finance behind the Paris agreement and to deliver a breakthrough on adaptation to protect the world; especially the most vulnerable people and countries.

There was a moral and economic case for giving more support to developing countries to deal with climate impacts, rather than focusing investment mostly on cutting emissions, he stated.

He urged donor governments and development banks to commit to boosting their share of funding for adaptation and resilience to at least 50 per cent of their climate finance support by next November’s COP26 UN climate summit in Glasgow.

“Every country, city, financial institution and company should adopt plans for transitioning to net zero emissions by 2050 and take decisive action now to put themselves on the right path towards achieving this vision, which means cutting global emissions by 45 per cent by 2030 compared with 2010 levels,” Mr Guterres urged.

Some countries, however, had used the Covid crisis to roll back environmental protections. Others were expanding natural resource exploitation and retreating from climate ambition. “G20 members, in their rescue packages, are spending 50 per cent more on sectors linked to fossil fuel production and consumption than on low-carbon energy.”

Enforceable regulatory and fiscal steps were also needed for the shipping industry and aviation to deliver on decarbonisation. Commitments to net zero emissions, however, were sending a clear signal to investors, markets and finance ministers, he said. “But we need to go further. We need all governments to translate these pledges into policies, plans and targets with specific timelines. This will provide certainty and confidence for businesses and the financial sector to invest for net zero.”

That meant putting a price on carbon, phasing out fossil fuel finance and ending fossil fuel subsidies. “Companies need to adjust their business models – and investors need to demand information from companies on the resilience of those models,” he insisted.

The world’s pension funds, managing $32 trillion dollars in assets, were in a unique position to move the needle. “They are still far from doing so.”