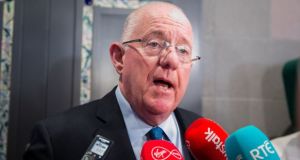 Minister for Justice Charlie Flanagan said: “I know that the people of Ireland will welcome them with open arms.” File photograph: Gareth Chaney/Collins

The families will initially stay at the Mosney centre in Co Meath, where they will receive supports such as English language and orientation classes, before being settled in communities around the country.

Those who arrived in Mosney on Monday had been living in a UN Refugee Agency camp in Lebanon and had already been granted refugee status prior to their arrival in Ireland.

They had also been interviewed by officials from the Department of Justice as part of the resettlement strand of the Irish Refugee Protection Programme.

“I am delighted to have had the opportunity to meet with the families today,” Mr Flanagan said.

“Their experiences over the last few years as they were forced to flee their homes have been traumatic and their stories are harrowing and deeply moving.

“Their long journey to find safety and sanctuary is now over and I know that the people of Ireland will welcome them with open arms and the offer of friendship and support.”