Tonnes of snow have been brought by truck to the centre of Moscow in an attempt to boost holiday spirit in what has so far been almost snow-free December. Video: David Dunne/Reuters 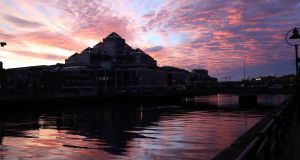 A plume of warm air from the Azores has brought extraordinarily mild conditions to Ireland and a record high for late December to Scotland.

Temperatures hit 13.6 degrees in the Phoenix Park on Sunday, six degrees higher than the monthly average for the end of December. It was even warmer on Saturday when the thermometer hit 14 degrees.

Average temperatures in Dublin are between six and seven degrees in late December.

The highest temperatures on Monday were along the southwest coast, with Cork and Kerry recording 11 degrees. Further inland parts of the south reached 10 degrees. Met Éireann said Tuesday would be cooler.

Met Éireann forecaster Andrew Doran-Sherlock said the mild temperatures have been caused by a southerly air flow. Normally the wind comes from the south-west which brings cool, showery conditions.

A high of 16.8 degrees was recorded at 3am on Sunday morning in Cassley in the Scottish Highlands, a place that is amongst the coldest in the UK during the winter.

The freak weather conditions in Cassley was caused by the Foehn Effect when mild, moist air rises on one side of the mountain and falls as hot dry air on the other side.

Elsewhere in Europe, Moscow is recording its warmest December on record. On December 18th the temperature in Moscow reached 5.6 degrees, breaking a record that stood since 1886.

It has been so mild in Moscow that the authorities have laid down artificial snow for the festive period.

The British Met Office is predicting the winter of 2019/2020 is most likely to be warmer than normal.

It is predicting that 2020 will be another record temperature year with an expected increase in the global average temperature of 1.1 degrees.

This increase is being caused by man-made global emissions and not by natural phenomena like El Niño, it added.

The Irish forecast for the New Year period is for cooler weather to prevail from Monday night on.

New Year’s Day will be largely dry and windy with maximum temperatures of between 7 and 11 degrees. Thursday will also be windy and wet, although mild.

Thursday’s unsettled weather will give way on Friday to dry conditions which will persist into the early stages of next week.

Mr Doran-Sherlock says the outlook is “pretty dry with a few showers but nothing significant”.

“After the rain showers clear away on Thursday, we are getting the high pressure building up again. It looks like that will hold for most of the weekend. We are getting into more normal temperatures.”