Phil Hogan: 'A no-deal Brexit would pour salt into the wounds' 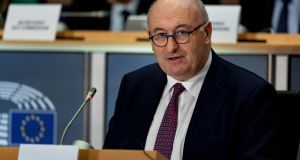 Phil Hogan: “Dublin, London and Brussels need to be inclusive and careful in addressing the sensitivities of all stakeholders in Northern Ireland.” Photograph: Kenzo Tribouillard/AFP/Getty

EU trade commissioner Phil Hogan is now a powerful and influential figure on the world stage, representing the interests of the 450 million people who live in the wealthiest trading bloc on the planet.

Over the next 12 months he will be a central figure in the Brexit talks, as the UK negotiates its way out of the EU. He will also lead the European team in the negotiations with the United States which will have a critical bearing on the future of world trade.

It is quite a journey for the man from Tullaroan, Co Kilkenny who thought his political career was finished back in 1995 when he was forced to resign as a junior minister over an inadvertent press release containing details of that year’s budget due to be announced an hour later.

In his new role, the commissioner will be required to join the great and the good of the global elite in the Swiss resort of Davos in a few weeks. He jokes that it will make a change from meeting farmers from all parts of the EU at the Green Week in Berlin which he has enjoyed attending every January for the past five years.

Mr Hogan had his first phone call with US trade representative Robert Lightizer just before Christmas.

“We agreed to meet in Washington in mid-January to discuss the long list of issues causing strain in the relationship between the EU and the US. There is no point in getting into the details of resolving trade irritants unless we agree a line on a common trade agenda.

“I will be seeking a reset of the EU/US trade relationship on issues like tariffs on steel and aluminium and the threat of US tariffs in response to a digital tax in Europe, ” he said.

Reform of the World Trade Organisation (WTO) will be another topic for discussion, as will industrial subsidies and forced technology transfers. These issues have featured in the US trade talks with China.

“Extensive reform will be needed to ensure that a rules-based system can be agreed and enforced. You can’t have rules and discipline without having a good referee to adjudicate and enforce their implementation globally,” said Mr Hogan referring to the decision of US president Donald Trump to block the appointment of new WTO judges which threatens the organisation’s future.

On Brexit, he pointed out that a mandate would be required from the European Council by February 1st to allow the commission to open negotiations with the UK for the next phase of the process. Michel Barnier will be the overall interlocutor and Hogan will be directly responsible for negotiating the free trade agreement.

He believes agreement on a level playing pitch for standards and regulation will be the most difficult issue to resolve. On the positive side, he hopes an agreement will sort out confusion about the terms of the hybrid agreement in October about where checks and controls would be carried out on goods moving between the British mainland and Northern Ireland.

He thinks the outcome of the UK election in the North has been positive in that political representation is now more in line with grassroots opinion with a better reflection of the Brexit concerns of business, agrifood and community groups.

“It is clear that Northern Ireland stakeholder views have not been articulated fairly or accurately over past three years. What was sadly missing was the Northern Ireland Assembly to allow all views and concerns to be heard.

“The most helpful thing now would be for Stormont to be up and running. North-south and east-west forums need to meet regularly to debate and assist implementation of the final EU/UK deal.

“Dublin, London and Brussels need to be inclusive and careful in addressing the sensitivities of all stakeholders in Northern Ireland. It is not too late to hear the views of business, farmers and community groups as part of the future relationship talks.”

He added that the final deal between the EU and the UK would secure the key priority of no hard border on the island of Ireland.

“Northern Ireland will remain in the UK customs territory but, at the same time, benefit from the free movement of goods within the single market without tariffs, quotas, checks or controls. EU state aid and VAT rules will continue to apply in Northern Ireland under the control of the European Court of Justice.”

Noting how British prime minister Boris Johnson had won a very impressive majority in the UK election, Mr Hogan said he now needed to show leadership and use that electoral support for the good of his country.

'We have made it very clear that, because of geographical proximity and our economic interdependence with the UK, any new trading arrangement will require firm and fair rules'

“A good Brexit deal can have a unifying effect after what has been a most divisive period for the UK. On the flip side a no-deal Brexit would pour salt into the wounds and risks dividing families, communities and regions. This is precisely what the UK does not need now.”

Mr Hogan said that no matter how ambitious the future trade agreement was it would not change the fact of Brexit. “Particularly on goods the UK government has so far avoided any statement of the UK aligning with the EU on regulatory aspects. We all have to come to terms with the reality that Brexit means there will be two markets not a single market.

“We have to re-erect barriers to trade that EU membership has abolished not because we choose to do so but because the UK chooses to do so. As things stand the UK wants to leave the single market and customs union. This move still baffles me because the full consequences of that decision are still not understood in the UK. Why trade a Rolls Royce for a second-hand saloon.”

He said preserving the integrity of the single market remained the top priority of the EU.

“This isn’t just a commission policy or priority – it is the priority of the EU 27 because it is in their economic interest. We have made it very clear that, because of geographical proximity and our economic interdependence with the UK, any new trading arrangement will require firm and fair rules.”

The commissioner pointed out that Mr Johnson had said he wanted a “best in class free trade agreement” but, as Mr Barnier has pointed out “best in class” means a trade agreement that is “not just about economic and financial gains, with zero tariffs and zero quotas but an agreement which is in the interests of our people, their environment, respect for their rights and for their quality of life”.

“We therefore require solid guarantees of a level playing field in relation to state aid, labour and environmental protections and taxation agreements. Customs is another example of where the revised protocol tones down the ambition of the earlier agreement with Theresa May. We have had to abolish single customs territory between the EU and the UK which was part of the backstop.”

Mr Hogan said both sides would have recourse to all tools to facilitate customs cooperation, including technologies but the EU must, first and foremost, protect its financial interests and the enforcement of its public policies to guarantee their integrity.