Dublin pitches closed due to damage caused by joyriders

Football pitches in Dublin's Kilbogget Park, home to Cabinteely FC, have been left badly damaged after a car was driven through them and then set alight. Video: Colm Hand 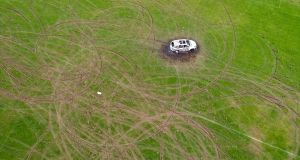 Damage caused in Kilbogget Park, and a burnt-out car found at the scene. Photograph: Colm Hand

A number of football pitches in south Co Dublin have been closed after joyriders caused extensive damage over the weekend.

Photographs and video posted to social media show deep grooves and tyre-track scarring in the pitches and the remains of a burnt-out car.

Gardaí in Cabinteely responded to a report of a car driving around Kilbogget Park at approximately 4.36am on Saturday; a car was on fire when officers arrived at the scene.

As many as 60 local clubs use the pitches, including Cabinteely Football Club (FC), and the pitches are used for different sports and recreations.

Chairperson of Cabinteely FC Michael Galvin said two of the damaged pitches are now out of action, and one other received minor damage.

The running track near the pitches was also said to have been damaged.

Mr Galvin said the damage will have a significant impact on their club. “Kids are anxious to get back, especially after the amount of cancellations before due to the bad weather in November,” he said.

Fine Gael councillor Anna Grainger said the impact of the damage to the pitches will have a knock-on effect across the community.

“It’s not just the children, managers and players [affected], but other teams coming to play,” she said. “It’s devastating to the community at large, as well as for the people giving up their time volunteering.”

Ms Grainger also said that, judging by the tracks left in the ground, tyres were not on all the wheels of the car, which resulted in worse damage.

Fellow Fine Gael councillor Jennifer Carroll MacNeill said the vandalism was hugely damaging to the community and said she was “thoroughly disgusted and disappointed”.

Similar incidents of vandalism using motorised vehicles have occurred over Christmas, including in Drimnagh where off-road bikes were used to damage playing fields on Benmadigan Road.

It is not known yet when the Kilbogget Park pitches will be back in working order. A council assessment will be taking place in the coming weeks.

Gardaí are investigating the vandalism.