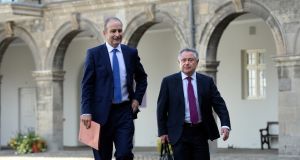 Fianna Fáil has a policy platform that is more in line with what Labour wants to achieve if it re-enters government than Taoiseach Leo Varadkar’s Fine Gael, Brendan Howlin has said.

Mr Howlin also said he would like to see his party align with others on the centre left – such as the Green Party, the Social Democrats and like-minded Independents – to form a single bloc to negotiate participation in government after the next election.

In an interview with The Irish Times, the Labour leader said both Fianna Fáil and Fine Gael were “chameleons” who will change their polices to get into power.

However, he was critical of Mr Varadkar’s recent announcement of a tax cutting policy that would see the threshold at which people hit the higher rate of income tax rise to €50,000 over five years.

As a result of changes announced in the budget in October, the 40 per cent rate will now be levied on income above €35,300.

Mr Varadkar has privately mused about the prospect of a coalition led by Fine Gael that would include Labour, the Greens and the Social Democrats. Tánaiste Simon Coveney publicly said such an alliance is his preferred government after the next election.

However, when asked how Fine Gael tax policy could align with a number of “red line” policies Labour will demand are met before entering government, the Wexford TD said: “Those particular twains won’t be meeting, unless something gives there – and it won’t be us.

“Any discussions we have with anybody after the next election will be on the basis of our policies and if the policy platform outlined by Leo is not negotiable, then there is nothing to negotiate. If they have an incompatible policy platform to ours, then that’s incompatible.”

Speaking separately, Mr Varadkar defended his tax plan. He said his proposals will not mean that the overall income tax take falls.

“The amount of money we take in income tax pretty much every year is going up by about €1.2 billion,” he said.

“My proposal is to give about half of that back in tax cuts and I think that is only fair. So it is not that we are planning to reduce income-tax yield. What I am saying is that because of a rising economy – more people working, working longer hours, getting paid more – our tax take is increasing by €1.2 billion a year.”

Mr Howlin said that while the views of some in Fianna Fáil differ from Labour on social issues, Micheál Martin had developed his party into one that was centre left.

“The current version of Fianna Fáil – and that is the problem with Fianna Fáil, it is not an ideologically anchored party – certainly is closer to a social democratic model than the Leo version of Fine Gael, that’s true.

“If you look at the way they dealt with social issues, they are not compatible with us. Now, Micheál Martin himself made the move during the debate on the Eighth Amendment but his party has been resistant to that.”

Mr Howlin, however, did not rule out coalition with either of the two bigger parties and indicated Fine Gael could change its policies to build a coalition.

“Needs must often and I think Leo’s overriding requirement is to be Taoiseach.”