Student who died at the Cliffs of Moher has been identified 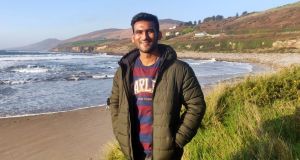 A young man who fell to his death at the Cliffs of Moher on Friday has been identified as Anand Goel, a Trinity College Student from India.

Mr Goel, who was studying marketing and design, appears to have lost his footing and fell 600ft to the sea below at the popular Co Clare tourist destination. It is believed that he was taking a selfie photograph at the time of the incident.

Originally from Delhi, he came to Dublin in September to begin his studies and had been travelling around the country in his spare time.

Trinity College, Dublin is providing support to the family of the 26-year-old while the Indian embassy is working to repatriate his remains.

“We are also reaching out to his fellow students, friends and staff here at Trinity supporting them during this distressing time. We are working closely with the Indian Embassy and An Garda Síochána in doing so,” a spokeswoman said.

He said he was “grateful” to the Irish Coast Guard and helicopter and boat teams for helping to recover Mr Goel’s body.

“Heartfelt condolences to bereaved family. Your loss is our loss,” Mr Kumar wrote on Facebook. “Embassy stands solidly with you and is assisting with all formalities. We’ll be bringing you home in earliest possible time frame.”

The alarm was raised at around 3.15pm on Friday after the tragedy was witnessed by a number of people. Eye-witnesses are understood to have told gardaí Mr Goel was taking a selfie at the time and lost his footing.

It’s understood Mr Goel had arrived at the Cliffs of Moher on a tour bus and was travelling alone. It’s also believed he had been travelling around Ireland in recent months taking photographs.

Gardaí, members of the Doolin unit of the Irish Coast Guard and the Shannon based search and rescue helicopter were mobilised to the incident as soon as the alarm was raised. Rescue 115 had been on a training mission at the time and was able to respond to the incident promptly.

Mr Goel’s body was recovered and he was formally pronounced dead at the Coast Guard station before his remains were removed to University Hospital Limerick for formal identification and a postmortem.

Gardaí interviewed a number of eye-witnesses following the incident and are treating the matter as a tragic accident.

A Garda spokesman said: “The man has also been identified and his family in India has been notified. We are working with the embassy to facilitate the repatriation of the man’s remains.”

He added: “We will continue with the investigation and prepare a file for the county coroner who will hold an inquest in due course.”