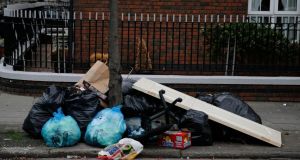 Dublin’s north inner city is once again the dirtiest district in the State with “no substantial progress” evident in combatting littering, according to Irish Business Against Litter (Ibal).

Disadvantaged urban areas in Dublin, Cork and Galway have the worst litter problems in the State with “no noticeable improvement” in cleanliness, according to the anti-litter business organisation’s final report for last year.

Litter surveys of 40 towns and urban areas carried out by An Taisce for Ibal found Fermoy in Co Cork was the cleanest place in the State, while Dublin’s north inner city was the dirtiest.

While almost all of Ireland’s main towns were ranked as “clean”, with Athlone, Killarney, Naas and Navan following Fermoy in the top five spots, parts of larger cities continued to be littered “and are not improving”, Ibal spokesman Conor Horgan said.

“Three years ago we deliberately shone a spotlight on specific city areas in the hope that the attention would spur councils and communities into action,” he said. “It is fair to say we have seen no noticeable improvement in any of these areas – nor have we seen much by way of substantial measures to them turn around.”

Ballybane in Galway city was the dirtiest place after Dublin’s north inner city, followed by the northside of Cork city, the Mahon area of Cork city and Ballymun in north Dublin.

Mr Horgan noted that these were all disadvantaged urban areas with high concentrations of social housing.

“The historic development of large areas of social housing has shaped a ‘them and us’ society and the gap is widening,” he said “Litter is a symptom of a greater malaise and keeping these areas as clean and well presented as the rest of a city would over time have significant benefits. We need local authorities to take the lead.”

In Galway, Fana Glas in Ballybane was also deemed a litter black spot, where “an air of neglect pervaded throughout”, according the An Taisce, which noted that communal areas were “in very poor condition”.

Ballymun’s result was brought down by dumping and burned items left at the cleared site of the former flat blocks and the recycling facility at the shopping centre.

The Maples in Mahon was “not just littered but subject to dumping with soiled nappies strewn about. There were very heavy levels of all manner of litter throughout,” An Taisce said.

The report on Cork’s northside highlighted the North Ring Road as being “almost landfill-like” in places and, An Taisce said, “long-term littered sites that have been repeatedly highlighted in previous surveys are not being dealt with.”

Lord Mayor of Dublin Nial Ring, who represents the north inner city, said his constituents needed to co-operate with the council in combating illegal dumping.

“It’s very disappointing that the north inner city is once again highlighted as a litter black spot,” he said. “It is the one issue which myself and my fellow councillors find both frustrating and almost impossible to solve without co-operation of our constituents.”

However, Mr Ring claimed the area was also blighted by littering by “outsiders”.

“The fact that the area has such a throughput of residents and visitors gives us this unique problem . . . All we can do is continue to educate people and hope that a sense of civic responsibility can be instilled in those responsible.”

“It is vital that communities, businesses and local authorities in towns all across Ireland, work together to manage waste properly and reduce litter,” he said.