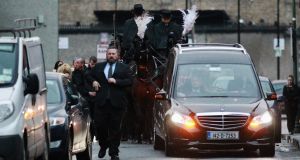 The gently soaring notes of Amazing Grace filled the huge Victorian interior of St Catherine of Alexandria Church on Dublin’s Meath Street as six black-suited men carried in the coffin of the gangland figure Mark Desmond.

The drug dealer and enforcer was shot dead in a Lucan park on December 2nd. He liked to jog in the park but may have gone there on the day of his killing to meet a dealer.

His remains arrived at the church in a glass case carriage, drawn by two black horses, each with a white feather plume on its head. Behind walked his grieving family, many in tears.

For a church that could comfortably hold 1,500 people, the family and close friends of the slain man filling the first few pews numbered perhaps no more than 50. Further back, about 30 other people sat in pews; some were friends and associates perhaps, but many appeared to be local people attending morning Mass.

The coffin was laid in front of the altar, close to the front in which the deceased was baptised in 1975. A photograph of him in a red sweatshirt top was placed on the coffin, along with an elongated wreath of red and white flowers spelling out the word “splending” – a made-up word, a favourite of Desmond’s, invented to communicate, apparently, money and the good times associated with it.

Symbols of his life included a Manchester United shirt, an iPod and a book. The deceased was “especially well read when it came to politics”, the congregation was told.

No one wanted to be where they now were, said Fr Richie Goode looking down on the sparse assembly of mourners.

“We don’t expect to be in church celebrating a funeral Mass for someone who is 41 years old,” he said. “None of us want to be here but we are here. We are here to say goodbye to Mark who has completed his pilgrim journey.”

In Desmond’s case, that was a journey of extreme violence and thuggery, a gangland picaresque in which dealers who fell foul of him got bullets in their heads. They might also be raped, neither age nor gender being a barrier to his proclivities.

“All of you here knew Mark,” said Fr Goode in his homily, “all of you have your own specific memories of Mark. And memories are not of the big things in life; we don’t move from one big event to another. Memories are of the little things.”

For the families of Darren Casey (19) and Patrick Murray (20), whose bullet-ridden bodies were taken from the Grand Canal in Co Kildare in January 2000, those memories include how a chief witness at Desmond’s trial for their murder suddenly withdrew her evidence, leaving him to be convicted only for possession of guns.

The readings were from Thessalonians and Isaiah. In between, soloist Lorraine Maguire sang Be Not Afraid, accompanied by harpist Mary O’Donnell.

As the heavens opened and rain drenched Meath Street, Desmond’s body was taken from the church and placed back into the horse-drawn hearse and, followed by three long funeral limos and a Garda escort, driven to Lucan to be interred. There was no church eulogy.

The final tribute was left to Shirley Bassey, belting out her signature number, Big Spender.

The minute you walked in the joint I could see you were a man of distinction A real big spender Good lookin’, so refined Say, wouldn’t you like to know what’s goin’ on in my mind?