Fatal foetal abnormality: ‘The kindest thing for our baby was to terminate’ 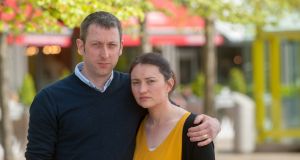 Susan and Tim Corcoran, from Donoughmore, Co Cork, spoke of their personal experience of the Eighth Amendment at the launch of Fine Gael’s campaign in Cor for a Yes vote. Photograph: Brian Lougheed.

A couple who had to travel to the UK for an abortion after their baby was diagnosed with a fatal foetal abnormality have urged voters to repeal the Eighth Amendment so no one else will have to endure the trauma they did.

Susan and Tim Corcoran, from Donoughmore, Co Cork said that in 2013 a scan revealed their baby girl was suffering from Edwards syndrome, a genetic disorder, and would not survive to full term.

Ms Corcoran received a standing ovation after recounting the couple’s story as Fine Gael launched its campaign in Cork for a Yes vote in the May 25th referendum on repealing the Eighth Amendment, which has since 1983 given an equal right to life to the mother and unborn.

She spoke about how happy they were when she became pregnant as she had miscarried the previous year. She said all was going well until she went for a scan at Cork University Maternity Hospital at 14 weeks and learned their baby would not go to full term.

After the screening process confirmed the baby had a severe form of the chromosomal condition, the couple met their consultant.

They returned to the hospital to inform the consultant, who said the only advice she could give from hearing from other couples in similar situations, was to go to a hospital with a foetal medical unit as opposed to a clinic in the UK as they would provide emotional support after the termination.

Ms Corcoran said they returned home and ended up doing a Google search on abortion in the UK but all that kept coming up were clinics. They were anxious to heed their consultant’s advice about choosing a hospital, but felt they were left with no alternative but to go to a clinic.

“But then I broke down to one of the very few friends that knew about the situation and she said ‘Hang on, I’ve a cousin who is a mid-wife in London in St Mary’s Paddington, let me speak to her’ and from that moment then everything went so quick because she could help us.

“I went to Cork Airport the next day and was just bawling crying all the way to the Ryanair desk and I’ve heard of it from so many women who’ve been in this situation - ‘I’m here with my baby inside of me and when I set foot in this country again, I will have no baby’,” she recalled.

On arrival at St Mary’s in Paddington, Ms Corcoran, who was at this stage 20 weeks pregnant, met a consultant but was required to get a second opinion. The consultant confirmed that her baby had Edwards Syndrome, as well as other complications.

“I will never forget this - as I was lying down being scanned, the consultant at St Mary’s touched my leg and said ‘Susan, you are doing the right thing’ and I burst into tears because it was the first time I actually felt that what I was doing wasn’t wrong and that I wasn’t a bad mother,” she said.

Ms Corcoran said their baby daughter, Cara, was born on June 26th, 2013. After spending time with her family in the UK, they returned to Ireland. Ms Corcoran said she was in “a daze” for several weeks afterwards but that the experience had left her with a clear opinion of what should happen on May 25th.

“I never thought I’d ever be in this situation. People never think it could happen to them but it can and it could be your daughter and they might have to make this decision and it’s just so unfair - we need to repeal the Eighth Amendment so no one else has to go through what we went through.”