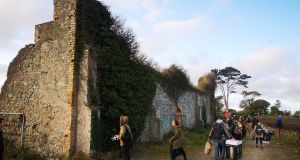 Darragh McCullough said the attendees at the party cleaned up their stuff and left without incident. Photograph: @darraghmccullou/Twitter

A north Co Dublin farmer went to harvest his final field of the 2020 season only to discover more than 100 people had turned it into an overnight rave.

Darragh McCullough said that when he approached the revellers just after 6am on Sunday morning, they immediately packed up, cleaned up and left without incident.

In what appears to be the latest in a string of alternative Covid-era social gatherings, the organisers had set up a sound system facing out over the sea and far enough from any main roads to avoid detection.

Mr McCullough explained how he encountered a small group of people drinking beer near the entrance to the field, which slopes upwards away from the adjacent shoreline.

“So I thought, okay – a couple of people boozing on the beach overnight,” he said. “They immediately did an about-turn and headed up the field. I went after them, telling them they couldn’t be here, it was private property.

“As soon as I got to the brow of the hill: boom! There were taxis, vans – at least 100 people. They were packing up decks and a sound system.”

The rave had been set up inside the walls of an old ruin, pointing out to sea. That, as well as the site being about 700m from the main road, meant being heard was extremely unlikely.

Although the field is accessible by road, Mr McCullough has to approach it via the beach as his combine harvester is too wide for an old bridge along the normal route.

That is a challenge in itself – an operation that requires the crop to be ready in suitable weather with a low tide. When all those conditions align, the last thing he needs is a field full of ravers.

“It’s not a bad spot to have a party, in fairness to them. I just thought: Oh my God, are you kidding me?” he said.

Those present identified themselves as Brazilians and dozens of them could be seen hanging around metal fencing at the site in video taken that morning.

They did not specify that the event was in response to Covid-19 restrictions on normal nightlife, although Mr McCullough thinks that is likely.

“This is going on all over the country. People are people; we’re social animals,” he said.

“Logic would tell you that this gang would have been out in a bar or some venue in Dublin if they were open or available.”

Then, as everyone prepared to leave, a number of them began packing away all of their rubbish, leaving no signs that anything had gone on.

“Not only did they all go, there was no guff or abuse to me and a couple of lads went around with bin bags and got every scrap; there wasn’t a bottle left.”

Once emptied, Mr McCullough got on with harvesting his field full of spring beans – more than €10,000 worth of crop that was also untarnished by events. At 6pm, harvest complete, he drove his combine harvester back along the beach.