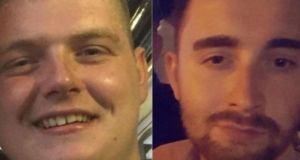 Nathan Kelly (left), from Glengad, Co Donegal, and Christopher McLaughlin, from Malin, Co Donegal, were found not guilty of murder and manslaughter by a jury in Sydney, Australia.

Two Irish tradesmen have been acquitted of the murder and manslaughter of a homeless man in Sydney, Australia after arguing that they were attacked by the man at the end of a night out.

Nathan Kelly (23), from Glengad, Co Donegal, and Christopher McLaughlin (25) from Malin, Co Donegal, had pleaded not guilty to murdering Paul Tavelardis. The 66-year-old died nine days after an altercation with the two at Grosvenor Crescent, Summer Hill, Sydney on December 29th, 2018.

Lawyers for the two accused argued that they never formed the intent to kill or cause serious harm and were responding to an attack by Mr Tavelardis, who lived in his car on the street. The prosecution alleged that the Irish men repeatedly hit Mr Tavelardis after he fell to the ground, which both accused denied.

After deliberating for almost a week, a New South Wales Supreme Court jury found Mr Kelly and Mr McLaughlin not guilty of murder and manslaughter on Monday.

Both had spent more than 20 months on remand and have since had their working holiday visas revoked. This prompted debate after the verdicts as the judge questioned whether a Corrective Services officer could continue to hold Mr Kelly and Mr McLaughlin before immigration authorities arrived at court.

“Mr Kelly is prepared to go with him to immigration authorities,” his lawyer said. “He doesn’t want to be wandering around the community.”

“He wants to go home, I imagine,” Justice Bellew replied.

Mr McLaughlin also indicated he was prepared to wait in the court for immigration authorities to arrive.

The jury heard during the trial that Mr Kelly and Mr McLaughlin had been drinking heavily prior to the 12.30am incident with Mr Tavelardis.

On their return to Grosvenor Crescent, where they lived, the two men said they found Mr Tavelardis trying to break into Mr McLaughlin’s vehicle.

Both men’s barristers said that after a short conversation, the older man struck out at Mr Kelly with a metal pipe.

A neighbour recalled hearing a loud scream of “fear” and peering out his window to see Mr Tavelardis run around his car with a large item in his hand towards the tradesmen. But the younger men then began viciously beating him, the neighbour told the jury.

Police came to the scene and found Mr McLaughlin standing in the middle of the street with bloodied hands and ankles.

In police interview, Mr Kelly lifted his top to show a welt on his back where he said Mr Tavelardis had struck him.

Mr Kelly had been kicked out of the pub before the attack while Mr McLaughlin was described by a witness as being “blind drunk” at about 11pm. - AP