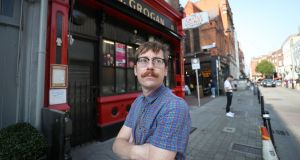 Grogan’s Castle Lounge is the nearest thing in modern Dublin to a literary and artistic pub.

The art on the walls signal that it is a pub like no other, where any night you care to wander down, there is usually somebody of note having a pint.

But nowadays its black doors are firmly shut and the only signs of life are the Open the Pubs campaign posters stuck to its windows .

The pub on William Street South was one of the first in Ireland to announce it was shutting its doors. It did so on March 13th two days before the Government announced the national lockdown.

Then its owner Donal Smith anticipated a longer closure than the proposed two weeks, but nobody expected six months later that the pubs in Dublin would remain shut.

It been a terrible time for bar staff across the State. While some returned to work when gastropubs opened up in July, those in so-called wet pubs like Grogan’s have been out of work and will remain so for at least the next three weeks.

Steven Gilgunn, who has worked in Grogan’s for four years and has been a full-time bar worker for 18 years, said there was an initial novelty, but this wore off as time dragged on.

“We thought it would go for two weeks, but we all knew that this would not be longer than that,” he said. Mr Gilgunn has been on the pandemic unemployment payment , approximately half his take-home wages.

Four times he got ready to return to work. “At the beginning we knew it had to be done, but there were so many false hopes. It is going to be this date and they [the Government] kept changing their minds while other bars were open,” he added.

“It was frustrating that somebody could have chicken wings to keep the virus away. It’s nonsense. ”

For many bar staff, work was also part of their social life. “It’s a fantastic pub, there’s a great atmosphere and you know a lot of people by name. You know the majority of your customers. It’s a social place. You are interested in their lives and they are interested in yours. It’s very frustrating being around the house,” Mr Gilgunn said.

The decision by the Government to close indoor dining in all gastropubs and restaurants for at least the next three weeks reduces the two-tier approach which rankled so many in the wet pubs.

“If we can all open up together in three weeks, it will be for the best but I don’t see how everywhere in Europe can have places open and we can’t,” Mr Gilgunn said.

Eamonn Gahan, a father of four who has worked in the Willows pub in Glasnevin, north Dublin, for 20 years, said his wages were cut in half when the virus struck. He will now have to reapply for the pandemic unemployment payment for the third time.

The latest announcement from the Government was the “fourth time we have been kicked in the teeth. I never suffered from depression. I am a cheerful person. I am tossing and turning. It’s been terrible and it’s been horrible”, he said.

The Licensed Vintners Association (LVA), which represents publicans in Dublin, accused the Government of undertaking a “pick and mix approach” to its new strategy which “renders it meaningless”.

Donall O’Keeffe, chief executive of the LVA, said restrictions to limit pubs and restaurants in the capital to outdoor seating only meant “effectively they will have destroyed their own plan within three days of publishing it.”