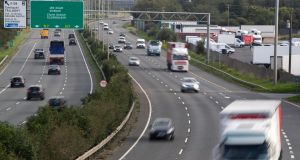 The outbound N7 dual carriageway at Kingswood, Co Dublin on Monday after a fatal collision between two cars at about 12.20am . Photograph: Colin Keegan, Collins Dublin

A fatal crash on the N7 in Dublin early on Monday was caused by a car being driven the wrong way down the dual carriageway shortly after it came to the attention of gardaí, investigators believe.

Shortly after midnight a Volkswagen Passat with two occupants was spotted by gardaí driving erratically in the Tallaght area.

Suspecting the car may have been stolen, gardaí attempted to speak to the driver but the Passat drove off the wrong way down an exit ramp onto the N7 at the Kingswood intersection.

Gardaí decided not to pursue the car onto the dual carriageway for safety reasons. A short time later, at 12.20am, the Passat collided with a Toyota Yaris on the N7. Members of the emergency services arrived on the scene a short time later and closed off a section of the road.

The driver of the Yaris, a man from Eastern Europe aged in his 40s, died at the scene after suffering what a source said were “catastrophic” injuries. He was brought to the Dublin City Morgue, where a postmortem was due to be carried out.

His passenger, a man in his 30s, suffered life-threatening injuries and was brought to Tallaght Hospital for treatment.

The occupants of the Passat, a man in his 20s and another in his 40s, were also taken for treatment. Gardaí said no arrests have been made yet.

The Garda Síochána Ombudsman Commission (Gsoc) was notified of the incident and is conducting an examination into the collision. It is obliged to examine all incidents where a death occurs following an interaction with gardaí.

“The circumstances of the referral was on the basis that the vehicle had come to the attention of gardaí prior to it entering the dual carriageway,” said a Gsoc spokesman. “The vehicle subsequently collided with a civilian vehicle.”

The stretch of the N7 where the collision happened was temporarily closed to allow forensic investigators to examine the scene but had reopened by 8am.

Gardaí based at Clondalkin station are continuing to investigate the circumstances of the incident.

Westmeath nursing home says it is managing Covid-19 outbreak 12:59
One of country’s main labs unable to process Covid-19 tests over weekend due to staff shortages 12:56
Golf and tennis clubs closed under Level 5 as deemed ‘non-essential’ services 12:23
Number of schools forced to close after hand sanitiser is recalled 12:12
Relatives not given chance to be with dying Covid nursing home residents - report 12:05