Family of Noah Donohoe thanks the public for ‘love and support’ 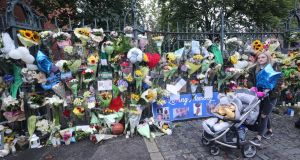 A woman passes floral tributes to Noah Donohoe at St Malach’s College where he went to school in Belfast. Photograph: PA

The family of Noah Donohoe has thanked the public for the “outpouring of goodwill and love” they have received since the teenager went missing.

“It has been an extremely traumatic time and this love is truly supporting us,” his family said.

However they also warned of a number of fake social media accounts which they said had been founded under Noah’s name and urged anyone who had information to contact the police or Relatives for Justice in Belfast, which is supporting the family.

The body of 14-year-old Noah Donohoe was found in a storm drain in north Belfast on June 27th, six days after he went missing.

He had cycled across the city from his home in south Belfast to the Northwood Road area of north Belfast, where he was last seen just after 6pm on Sunday, June 21st, prompting a massive search by the emergency services, community rescue volunteers and members of the public.

The police believe he may have fallen off his bicycle and hit his head, and he was seen discarding his clothing and cycling naked, actions which police and his family said were “completely out of character”.

The Police Service of Northern Ireland (PSNI) said there was “no evidence to suggest foul play.”

“Post mortem results have been shared with the Donohoe family who have requested that their privacy is respected,” he said. “If people post distasteful and patently untrue rumours on social media, we will investigate that.”

In a statement issued on Monday evening, Noah’s family said they recognised the “huge public concern of the entire population and we thank each and every one of you.

“So many people have been incredibly generous to us with practical support. This support includes providing pieces of information regarding Noah’s disappearance and death. Separately some have also ventilated concerns on social media platforms,” his family said.

“At this time, we are working with the PSNI on matters which are outstanding to the investigation and we are seeking answers to questions which arise.

“Noah’s disappearance and death undoubtedly raises questions, however public speculation and theory is unhelpful,” they said. “We are dealing with the facts.”

The statement said the family had seen a number of social media accounts which have been founded under Noah’s name seeking further information.

“These accounts do not have the family’s permission,” they said. “Rather than ventilating any issue on social media platforms we urge anyone with information regarding Noah’s disappearance and death to forward this information, including any photographic/CCTV footage to the PSNI or to Relatives for Justice.”

Relatives for Justice can be contacted on (028) 90627171 or via email at info@relativesforjustice.com (please mark email Re: Noah).

“All information will be dealt with in strictest confidence,” the family said. “The family once again wish to thank everyone who has helped us to date and hope we can rely on the public for their continued support and help.”