New restaurant rules: ‘It doesn’t make any sense to reopen’

Social-distancing rules could keep many restaurants closed. Others are hiking prices 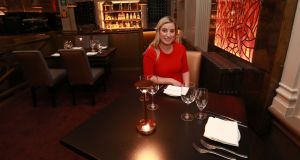 Social distancing: ‘For us 1m is the way we need to go, because we are already losing 40 per cent occupancy in the restaurant,’ says Nicole Jordan of Fire Steakhouse & Bar, in Dublin. Photograph: Laura Hutton

“We won’t be opening on June 29th, and it’s a really hard decision, because we have customers ringing up all the time saying they would like to book a table.” Shane Mitchell, who runs Asador and Prado restaurants in Dublin, believes that his businesses would be financially unviable if he implemented the 2m social-distancing protocol outlined in Fáilte Ireland’s guidelines for reopening hospitality businesses, which it published today.

“While I appreciate there has to be a focus on public health, and that’s first and foremost, there is also the economic health of the business to be considered, and if we reopened with those restrictions we’d be gone – and that’s not being dramatic. It’s the simple reality of it,” Mitchell says.

“Nine out of 10 restaurants won’t reopen with 2m social distancing,” says Adrian Cummins, chief executive of the Restaurants Association of Ireland, which represents more than 2,500 restaurants, gastrobars and cafes. “Businesses don’t know where they stand. From my members I’m hearing ‘It doesn’t make any sense for me to reopen.’”

One restaurant that does have definite plans to be open for business on June 29th is Fire Steakhouse & Bar, on Dawson Street in Dublin, which has published detailed plans for reopening that include many of the measures contained in the Fáilte Ireland guidelines but not 2m social distancing. The restaurant’s “welcome back protocol”, published on its website, refers to “a minimum of one metre distance”.

“We are stern on the 1m, because to be honest it would be very difficult for us to reopen and rehire staff if it’s 2m,” says its general manager, Nicole Jordan. “For us 1m is the way we need to go, because we are already losing 40 per cent occupancy in the restaurant. To lose another 20 percent, it would be extremely difficult to open the doors.”

Jordan says the restaurant, which has undergone a €1.1 million revamp, will open seven days a week, offering customers a two-hour time slot at tables. The business will operate outside of the 2m recommendation “unless it becomes law. Then we would have to go back to the drawing board.”

Fire’s decision raises issues about enforcement of the new protocols. “They are guidelines, and I’m kind of afraid to ask the question about who is going to enforce these,” Adrian Cummins says. “People are very worried, and that leads to mental-health problems, and I can feel it at the moment. The authorities need to be careful now about how they bring an entire industry through this process. They should be helping, as against taking out the stick to beat us.”

As things stand, many restaurant and cafe owners are still unsure whether they will reopen on June 29th – and, if they do, quite what sort of business they will be running. At Circa restaurant in Terenure, which was just a couple of weeks short of celebrating its first year in business when coronavirus struck, its co-owner and general manager, Ross Duffy, is adopting a wait-and-see policy.

“Everyone is waiting to see what everyone else is doing. My plan to survive and adapt was to reinvent the business and open as many revenue streams as possible, and we have since turned our Michelin Bib Gourmand restaurant into a takeaway, wine shop and cafe.”

Duffy intends to continue to operate as a daytime cafe and is considering opening the restaurant for dinner on Fridays and Saturday nights, starting in July. The restaurant’s evening takeaway menu may also be continued. “Our 44 seats will go to 16-18, and I’m not 100 per cent sure it will be viable. But we have a small garden space, and I will be looking to get it covered and to install some heaters, so tables removed from the restaurant room can be relocated to there.”

The Galway restaurateur and Irish Times columnist JP McMahon is also adopting a wait-and-see approach. “We could assume that it is going to go down to 1m, but that’s risky. We can’t open Aniar or Tartare with 2m, so we are going to wait and see if it comes down in the next week or so.”

McMahon also has concerns about whether the implementation of the strict guidelines and protocols will put people off visiting restaurants. It is a concern shared by many restaurateurs, including Shane Mitchell of Asador and Prado. “I don’t like the idea of being closed, but I am terrified of these restrictions. I read through that document and I thought to myself, That doesn’t sound like a great dining experience, with all of that going on.”

At the top end of the market, the Michelin-starred Liath, Aimsir and Ichigo Ichie have all announced reopening dates, some with significant price hikes. At the two-star Aimsir, in Co Kildare, which reopens on July 1st, the number of diners has been reduced by 30 per cent, and the tasting menu now costs €180 - up from the €115 listed in the current Michelin Guide (and €135 after the awards ceremony last October) – with alcoholic drinks pairings an additional €125 and nonalcoholic pairings €65. The one-star Liath, in Blackrock in Co Dublin, announced plans to open for just 10 guests three nights a week from August, with its tasting menu, including alcoholic drinks pairings, priced at €250, up from the €96 (not including drinks) that the Michelin Guide lists. In Cork, the one-star Ichigo Ichie reopens on July 7th, with its €120 tasting menu, whose price has not changed, served Tuesday to Saturday, with two sittings, at 6pm and 9pm, on Friday and Saturday.