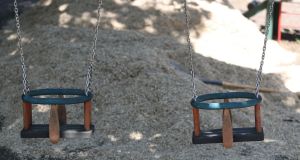 All Dublin city playgrounds are set to reopen on Tuesday once they have passed a safety inspection, Dublin City Council has said.

The decision to reopen all of the city playgrounds, albeit without council supervision or a cleansing regime, was discussed at a meeting of Dublin city councillors on Monday evening.

Playgrounds elsewhere around the country started reopening on Monday after being closed for nearly three months amid the Covid-19 pandemic.

In a statement, the council said a decision had been made to reopen playgrounds on Tuesday following clarification on the roadmap for phase two of the Government’s plan for reopening society following the coronavirus lockdown. The reopen would be subject to playgrounds passing an inspection, it noted.

Dublin City Council chief executive Owen Keegan had previously said on Monday that Dublin’s playgrounds would be reopened this week on a “pre-Covid-19 basis”, meaning “they will not be supervised and cleansing will not be in place”.

Last Friday the council had said its playgrounds, which have been fenced off since the middle of March under the coronavirus restrictions, would remain shut, despite assurances from Taoiseach Leo Varadkar that the facilities could open from Monday.

Mr Varadkar had confirmed that “outdoor facilities and amenities for children” could reopen under phase two of the Government’s accelerated roadmap for easing Covid-19 restrictions. This would include the reopening of playgrounds as long as they are supervised, he said.

However, Dublin City Council had said in response that it “does not operate supervised playgrounds” and so would not be reopening these facilities.

The council operates about 100 playgrounds, almost 70 of which are in public parks, with the remainder located in the grounds of social housing complexes.

Dún Laoghaire-Rathdown and Fingal county councils both confirmed on Monday that their playgrounds would reopen over the coming days following safety inspections of all equipment.

Fingal said it was working on a plan to allow for the “phased reopening of playgrounds” and that parents and guardians would be expected to supervise their children while in the playground, in line with existing physical distancing and hygiene guidelines.

A Dún Laoghaire-Rathdown spokesman said all of the council’s playgrounds were expected to reopen by the middle of this week and new signage outlining guidelines would be put in place.

As in Fingal, parents and guardians using parks in Dún Laoghaire-Rathdown will be expected to supervise their children, said the spokesman.

A spokeswoman for the Local Government Management Agency said all local authorities would open playgrounds this week subject to “necessary preparatory work”, including the provision of appropriate signage.