FAI ‘will not survive financially’ without fans attending games 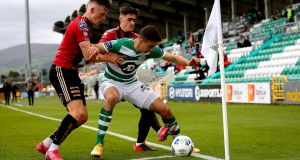 The Football Association of Ireland will “not survive financially” if fans continue to be prohibited from attending domestic and international matches due to Covid-19, the footballing body is to tell an Oireachtas committee on Friday.

The Irish Rugby Football Union is also to warn of a significant loss in spectator income – so much so that “the very existence of professional rugby on the island would be under significant threat in 2021”.

In a similar vein, the GAA is to inform the committee: “To say that our financial predicament is stark would not be an overstatement. It is our estimation that, in 2020 alone, there will be a €50 million hole in our finances.”

The three sporting organisations will appear before the Oireachtas Covid-19 committee ahead of Dublin’s expected move to Level 3 under the Government’s phased regulations, which would see a further curtailment of matches.

“The harsh reality is that our association will not survive financially without fans attending our international and League of Ireland matches,” he will state.

Mr Owens will state that league clubs “almost entirely depend financially on supporters attending games”, and he fears for their future financial viability.

“We are now entering really dangerous territory for them if the current ban on large spectator attendances continues much longer,” his opening statement reads.

“I cannot stress how critical it is that our fans are permitted to attend elite football games in a safe environment as soon as possible.”

Since football matches were allowed to resume, more than 1,000 Covid-19 tests had been conducted on international and League of Ireland players, all with negative results, according to Mr Owens.

As matches had safely resumed behind closed doors, “we strongly believe that we can deliver the same standards and protocols for a safe return for our fans in significant numbers,” Mr Owens says.

IRFU chief executive Philip Browne is to deliver a similar warning to politicians over the financial crisis facing the rugby body.

The organisation is dealing with a “cash flow crisis” as a result of the restrictions on spectators attending games, he will state.

“The absence of a clear pathway to the return of spectators, in meaningful numbers, means our perilous financial situation will continue to deteriorate at an alarming rate into 2021, moving to an unsustainable position by third quarter of that year,” his opening statement reads.

If those financial projections come to pass, “the very existence of professional rugby on the island would be under significant threat in 2021”, he says.

“Until we can admit spectators in meaningful numbers into our stadia, and return to some level approaching self-sustainability, the whole rugby infrastructure built over the last 150 years is under threat.”