Historic buildings in Ennistymon to be conserved under new traffic plan

Blake’s and Linnane’s shops featured in John Hinde postcards, but have fallen into decay 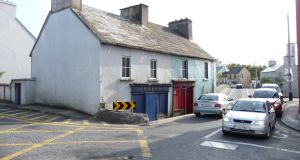 The council had originally planned to demolish two protected 19th-century shop buildings, Blake’s and Linnane’s at the so-called Blake’s Corner, until it faced pressure to back down.

The buildings featured for years in John Hinde postcards, though they fell into decay after they were bought by the council more than a decade ago, later deteriorating sharply.

The council was pressured by local campaign group Save Ennistymon’s Heritage to prevent further deterioration, though a former local Fianna Fáil councillor, Richard Nagle, said they were “falling down” and should be demolished.

The latest plans, said the council, would “address the serious traffic congestion issues” faced by Ennistymon town and improve traffic capacity and road safety, “while conserving and complementing the historic fabric of the town”.

It includes the compulsory purchase order of a number of buildings on both sides of the Inagh, including land required for a car park. Owners of the affected properties have the right to object.

Denis Vaughan, spokesman for Save Ennistymon’s Heritage, welcomed the latest plan, saying it would save Blake’s Corner, but said its buildings should now be fully restored and brought back into use.