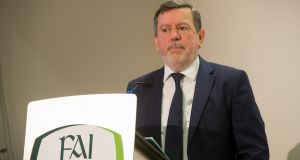 FAI president Donal Conway at the publication of the association’s accounts at Abbotstown in Dublin last Friday. Photograph: Gareth Chaney/Collins

Football Association of Ireland employees may not know until after Christmas what impact the funding crisis at the organisation will have on their jobs, a briefing on the fallout heard on Tuesday.

There are also fears severe cuts to funding of grassroots coaching could wipe out the next generation of Irish footballing talent.

On Tuesday morning, Denis Hynes, the Siptu staff representative, said they did not expect to receive details of the nature or extent of any job cuts until January.

However, the union expects to meet FAI management in the coming days at which some clarity may be given.

Accounts published by the association on Friday show the association, which employs 200 staff, has liabilities of €55 million and its auditors, Deloitte, declined to express the opinion that it is a going concern.

There is no clarity on the scale of possible redundancies. However, concerns have been raised about the future of development officers who earn between €35,000 and €43,000 per year, about one tenth of former chief executive John Delaney’s annual salary.

Mr Hynes said there were over 100 such officers around the country who were doing “incredible” work on “modest incomes”.

They work in school programmes, local clubs, and in areas of social exclusion including with disabled children.

“This is stuff that they do that is not really well known,” he said. “For those parents of those kids...it’s not about turning out the next Robbie Keane or Roy Keane, it’s about their kid being involved.”

Mr Hynes said although concerns were raised about funding last May, they were dismissed by FAI management.

“This is all (development officers) know: training, developing, educating kids and young adults. And here they find themselves in a situation now where they mightn’t have a job in the New Year,” Mr Hynes said, adding that someone must be held accountable for financial mismanagement.

Tuesday’s briefing, facilitated by Labour Senator Aodhán Ó Ríordáin, also heard that any significant blow to such grassroots personnel could have a serious knock-on effect.

He welcomed a commitment by the Minister for Sport Shane Ross that €195,000 a year was to be secured on an ongoing basis for the senior women’s team, one corner of the FAI where cuts were feared.

While a shakeup is ongoing among the FAI board, Mr McGuinness stressed changes were also required at executive level within the association in order to bring about the required cultural shift.

Such an overhaul, he said, should apply across the organisation. He also supported the idea of appointing former Ireland and Arsenal footballer Niall Quinn as the new chief executive.

“I worry about parents looking at football now. And would they move their kids into different sports because of what they see is going on.”

Tony Considine of the You Boys in Green supporters organisation said much of the detail remained in the dark.

“We don’t know...at this stage what level of redundancies we are talking about,” he said.