Father of two was a ‘popular lecturer and entertaining newspaper columnist’ 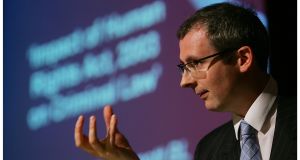 The death has taken place of the barrister, public commentator and author Paul Anthony McDermott SC.

The Minister for Justice and Equality, Charlie Flanagan, was among those who reacted, saying he was deeply saddened by the news.

Mr McDermott was “a very talented barrister, popular lecturer, and entertaining newspaper columnist, who would be greatly missed by many,” he said.

Married with two young children, Mr McDermott (47) was diagnosed with a serious illness in October. He is survived by his wife Annick, children Harry and Andrew, his mother Margaret and his brother, James, who is also a barrister.

Mr McDermott’s colleagues in the Law Library, politicians, those who worked with him in journalism, and former colleagues and students at UCD Law School and King’s Inns expressed their shock and sadness.

“A wonderfully talented barrister who was always giving of his time. He is a huge loss,” said Fianna Fáil TD James Browne.

“He was a specialist and an all-rounder, and was a very popular member of the Bar,” colleague Tony McGillicuddy told The Irish Times.

“He could lift legal concepts out of legalese and make them digestible to the wider public. It was a gift he had.”

So shocking to hear this news about Paul Anthony. He was always such a kind, warm and giving man, with a brilliant legal mind. Thinking of his family and loved ones now. Codladh sámh Paul Anthony. https://t.co/y5Zf4gzUWL

I’m deeply saddened to hear of the death of Paul Anthony McDermott (RIP). A very talented barrister, popular lecturer & entertaining newspaper columnist, he will be greatly missed by so many. Ar dheis Dé go raibh a anam.

Very sad news of the passing of Paul Anthony McDermott SC. Author of the leading textbook on Irish Contract Law, and a formidable advocate. https://t.co/b0jLAXqfUt

“One of the outstanding legal practitioners of his generation, his was a career of extraordinary accomplishments,” said Rossa Fanning SC.

Mr McDermot was made a junior counsel in 1996, the same year he was a winner of The Irish Times debating competition, and became a senior counsel in 2015.

He quickly built up a practice as a junior, working mostly in criminal law and getting work from the State. As a senior, he continued to work in criminal law while also taking work in a number of other areas, including regulatory and commercial disputes.

Held in highest regard

The chairman of the Bar Council, Micheál P O’Higgins SC, described Mr McDermott as a skilled and knowledgeable advocate who represented his clients with distinction, as well as being a “high level scholar” and a gifted teacher.

“His ability to explain complex legal subjects and distil them for better public understanding was unparalleled.”

He said Mr McDermott was for a great many years one of the main external legal advisors to the society on regulatory legal cases before the Solicitors Disciplinary Tribunal and the High Court.

“We held him and his advice in the highest regard. He was one of the legal profession’s great communicators.”

Mr McDermott graduated first in his class with a BCL degree from UCD before going on to the University of Cambridge and then back to UCD where he studied for a PhD.

He was still lecturing in UCD up to recently. His intellect and humour were remarked on by colleagues and students who took to social media.

“He was such a wonderful and funny man,” said Green Party chair Hazel Chu on Twitter. “I remember he made my contract law lectures in King’s Inns something students actually looked forward to.”

Mr McDermott was the author of a number of highly regarded text books on the law. His PhD thesis was the first of a number of works that he published while still in his 20s.

As well as appearing regularly on RTÉ radio and TV, he wrote a weekly column for the Sunday Times.

The Morning Ireland team from RTÉ Radio 1 tweeted its condolences on hearing the news.

“Paul Anthony McDermott was a regular guest on the programme providing our listeners with clear explanations of issues as diverse as bail laws, double jeopardy and tribunal confidentiality. Our thoughts are with his friends, family and colleagues.”