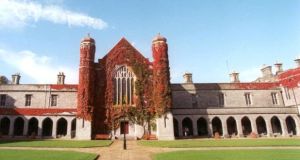 At NUI Galway, Laoise McNamara received funding for the study of Bone disease; and Dimitrios Zeugolis for research on cellular tissue.

Irish universities have secured six out of just over 300 lucrative European research grants which are awarded to the continent’s top scientists and scholars.

The Irish performance is an improvement on the last round when there was just a single European Research Council (ERC) grant winner from Ireland.

This prompted calls by Irish universities for an overhaul of Government funding for research and higher education.

The council on Tuesday announced the winners of its latest grants – worth some €600 million – which are considered the gold standard for research in Europe.

At NUI Galway, Laoise McNamara received funding for the study of Bone disease; and Dimitrios Zeugolis for research on cellular tissue.

Ireland was in 14th place with six awards, the same as Austria, followed by Finland (5) and Portugal (4).

The research projects proposed by the new grantees cover a wide range of topics in physical sciences and engineering, life sciences, as well as social sciences and humanities.

Overall, the ERC received 2,453 research proposals this time, out of which approximately 12 per cent will be funded. Thirty-one per cent of grants were awarded to female applicants.

This new round of grants will create an estimated 2,000 jobs for postdoctoral fellows, PhD students and other staff working in grantees’ research teams.

For example, Dr Ferri, a lecturer in the Maynooth University, will lead a team of five researchers on her project.

The team will also include dancers, choreographers and a filmmaker to develop the artistic elements of the project.

She said she was “delighted” to receive the grant which she hoped will ultimately lead to a new understanding of the legal concept of cultural diversity within EU law.

“This research comes at a crucially important time, 10 years after the ratification of the UN Convention on the Rights of Persons with Disabilities by the EU and has the possibility to make a real difference in the lives of those with a disability,” she said.

Maynooth University president Prof Philip Nolan congratulated Dr Ferri and said her work was “very much core to the ethos of Maynooth University, and it’s wonderful to see such valuable scholarship receive the support it deserves.”