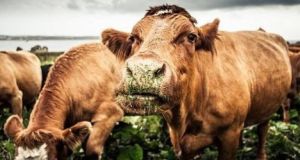 There has been a slight improvement in reducing carbon emissions in Ireland, the report says. Photograph: Getty Images

Ireland’s performance in addressing climate change improved over the past year although the State remains a laggard among European countries in cutting greenhouse gas emissions, a new study finds.

There has been a slight improvement in reducing carbon emissions, the CCPI report issued at the COP25 climate change meeting in Madrid finds. The report recognises with approval the Republic’s long-term carbon-neutral target for 2050, sending a carbon price signal by increasing carbon tax, and plans to phase out fossil fuels.

The report, jointly produced by Germanwatch, the NewClimate Institute and the Climate Action Network (CAN), ranks 57 states accounting for 90 per cent of the world’s emissions. It is based on a series of criteria including renewables, energy efficiency and climate policy and is regarded internationally as the definitive indicator of performance in addressing a warming world.

No country is classified as meeting the requirement to pursue actions containing global temperature rise to 1.5 degrees; the key requirement of the Paris Agreement. Sweden, Denmark and Morocco are closest to that point, while Chinese Taipei, Saudi Arabia and the US were the bottom three performers.

The report warns that Ireland’s per capita emissions remain at a high level, and significant challenges lie ahead in closing its emissions gap in meeting current 2030 targets and “aligning its emissions trajectory with a net zero goal for 2050”. As a consequence, the country still ranks as the second worst performer in the EU after Poland.

Ireland last year was moving down the rankings but “moves up this year”, acknowledged CCPI author Dr Nicklas Höhne. The lack of progress, however, in decarbonising key parts of the economy, “mainly in agriculture, road transport and the residential sector” stood out, he said.

As “a wind-rich country” Ireland was able to keep up a positive trend in increasing its share of renewable energy, which led to an overall high rating in the renewable energy category, he added.

While Ireland had a lot more to do, Dr Höhne noted it was supporting higher ambition by the EU, and embracing the difficult path of introducing five-yearly carbon budgets.

The report highlights, nonetheless, that “at the international level in the past” Ireland called for “less demanding targets due to claims regarding the economic importance of the agricultural sector”.

In 31 of the 57 high-emitting countries emissions are falling; the first time a majority have moved in the right direction, but the problem was that global emissions were increasing overall when they needed to be halved in the next decade.

“Every country has to be really more ambitious,” he added.

Responding to the report, Minister for Climate Action Richard Bruton said Ireland was set achieve its 2030 emission reduction targets and that the Government’s climate action plan will “put us on the right trajectory to meet net-zero emissions by 2050”.

Christian Aid’s policy and advocacy adviser Jennifer Higgins said Ireland still ranked among some of the worst performing countries in Europe. “Only a strong climate law can drive real action and improve Ireland’s reputation on preventing climate disruption,” she said.

Catherine Devitt, head of policy with Stop Climate Chaos Coalition, said the group expected Ireland to rise a little in the rankings as “we could hardly go any lower”.

“The Government has yet to join other member states in calling for the EU to urgently raise its ambition in line with the Paris Agreement, and the scale of 2 per cent emissions cuts per year presented in the Government’s plan is wholly inadequate,” she said.

On Tuesday, meanwhile, a law firm representing 16 children from around the world, including Swedish teen activist Greta Thunberg, sent letters to the governments of Norway and Canada.

Those countries’ support for their oil and gas industries breached the children’s rights under the UN Convention on the Rights of the Child, the letters said.