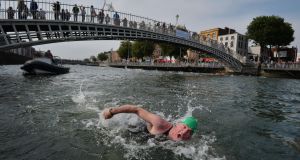 Water quality in the State’s rivers and lakes is getting worse, with just 20 rivers having “pristine” conditions last year, down from more than 500 in the 1980s, an Environmental Protection Agency (EPA) study has found.

The Water Quality in Ireland 2013-2018 report, published on Tuesday, states that just 52.8 per cent of surface water – which includes rivers, lakes, estuaries and coastal waters – was found to be in “satisfactory ecological health”. The remaining 47.2 per cent was deemed to be in a moderate, poor or bad ecological state.

The EPA described as “of very significant concern” a finding that the number of “pristine river sites” had fallen to 20, which it said was at “an all-time low”.

“These sites are important reservoirs of aquatic biodiversity and their decline is worrying,” said Shane O’Boyle of the EPA, one of the report’s authors.

The loss of pristine rivers was accompanied by a rise in the number of seriously polluted rivers, the “worst of the worst”, from six to nine, a reversal of a trend the EPA said had been moving in the other direction for many years.

EPA director Matt Crowe said the State was not only failing to improve overall water quality but was also failing to prevent the further deterioration of rivers.

The findings are based on an analysis of biological and environmental data collected from 3,217 water bodies – 2,703 surface water sites and 514 groundwater sites between 2013 and last year.

The number of places where surface water was deemed to be of a good or higher quality declined by 4.4 per cent since the last major assessment was carried out between 2005 and 2010.

The report found just 50.5 per cent of lake water was of a good or high ecological condition, while the figure for good or high quality water in estuaries and coastal waters was 80 per cent. A total of 92 per cent of groundwater bodies, 474 out of 514, were found to be in good chemical and quantitative condition. Groundwater is present beneath the ground in soil pore spaces and in the fractures of rock formations.

Mr O’Boyle said while 80 per cent of coastal waters were of a “good” or “high” ecological status, and 92 per cent of groundwater was of “good chemical and quantitative status”, the decline in river water and the failure to improve the quality of about half of the State’s lake water, placed Ireland in breach of its obligations under the EU Water Directive.

“A new sense of urgency is now needed to address the issues affecting water quality particularly in relation to agriculture and other land management practices which are key drivers behind the recent increases in nitrates and phosphorus that we are seeing in our rivers and lakes and the increasing inputs of these nutrients to our marine environment,” the report states.

Mary Gurrie, water programme manager with the EPA, said these excess nutrients come from human activities and that “we need to address the sources and the pathways by which these nutrients make their way into our rivers and lakes” .