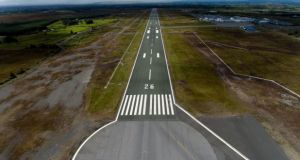 A recent economic study carried out by Ernst and Young found that in 2018 Knock airport helped generated €182 million in spending across the region.

A record numbers of passenger-journeys is expected to be set this year at Ireland West Airport near Knock, Co Mayo.

Mr Varadkar visited the airport on Friday to cut a ribbon on an €11 million refurbishment of the runway – the State’s third longest runway and in the words of the Taoiseach a “strategic asset for Ireland”.

Speaking at the ceremony, Mr Varadkar said he was “a big believer in Ireland West Airport” which he described as the international gateway to Connacht.

Mr Varadkar said the opening of the upgraded runway was “a super day for the airport” which makes “a huge contribution to tourism and economic development across this region”.

The Taoiseach said the refurbishment of the runway was among a number of infrastructural investments in the western region which included the Gort to Tuam motorway, the upgrading of the N4 to Sligo and the National Broadband Plan which he said was “soon to start”.

“We will continue to work with Ireland West as it gets closer to its goal of welcoming one million passengers through its doors every year; a goal which is clearly on the horizon,” he said.

The project which cost €11.2 million was supported to the value of 75 per cent by the Department of Transport , as part of the Project Ireland 2040 strategy, with the airport funding in the region of €2.8 million from its own funds to complete the project.

A recent economic study carried out by Ernst and Young found that in 2018 the airport helped generated €182 million in spending across the region and supported almost 3,000 jobs. It also generated €29 million for exchequer revenues.

Arthur French, airport chairman said runway 26/08 which opened in 1985, has seen more than 11 million passengers land and take off. He also thanked Mayo County Council for its work in completing a planning scheme for a strategic development zone around the airport. “We look forward to the completion of the project which will provide planning certainty for potential developments that may take place at the airport in the future” he said.