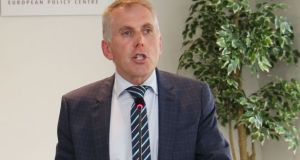 David Sterling, head of the Northern Ireland Civil Service, said he was particularly concerned about what will happen if it is left without ministerial direction in the event of a no-deal exit.

Northern Ireland’s top civil servant has called for the return of the political institutions at Stormont ahead of the “grave” possibility of a no-deal Brexit.

The head of the civil service in the UK, Sir Mark Sedwill, and the head of the Department of An Taoiseach, Martin Fraser, both praised the courage of David Sterling, head of the Northern Ireland Civil Service, after he spoke at a conference in Dundalk on Friday.

Mr Sterling, in his address, said he was particularly concerned about what will happen if the Northern Ireland Civil Service is left without ministerial direction in the event of a no-deal exit.

“We are already at the limits of what civil servants can and cannot do, which is why our conclusion is that the range of challenges and the magnitude of the decisions that will be needed to mitigate the most severe impacts could not, and should not, be taken by civil servants. We need our ministers back, and we need them back quickly.”

A no-deal Brexit would have a “profound and lasting effect” on Northern Ireland. Economic activity would drop by an estimated nine per cent over 10 years, and there would be a huge impact on beef, sheep and dairy farmers. Eight thousand small firms, employing 40,000 employees, would see their exports affected.

“There is potential for regulatory divergence in the electricity market. The lights will not go out but we could see an increase in prices. We may face a significant disruption to supplies of foods, medicines and chemicals, again leading to higher prices.”

And, he said, the police assessment was that there could be public protest and civil unrest, “perhaps leading to disruption of normal life”.

All of this, added in with a sense of threat to people’s identity, and increasing calls for a border poll, was leading to political instability and was making it more difficult for the political parties to agree to restore the political institutions in Northern Ireland.

“So our assessment is that the cumulative impact of all of this will be grave for Northern Ireland politically, economically and societally.”

Mr Sterling told the conference, organised by the Centre for Cross Border Studies, that the situation was creating a significant challenge for the Northern Ireland civil service.

“We have been working without the direction of democratically elected and accountable ministers for over two and half years now. And I want to be very clear. We need to see our executive restored as quickly as possible.”

Mr Sterling also addressed the effect of Brexit on diversity in Northern Ireland. He said the evidence showed that diverse cities were more successful. “We would just hope that, whatever way Brexit plays out, we don’t become a place that is seen as a cold house for people from elsewhere.”

Since 2016, approximately 35,000 EU citizens had left Northern Ireland. “We need to make sure that whatever way things play out, we are still an attractive place for skilled and able people from around the world.”

Mr Fraser said that in the 20 years since the Good Friday Agreement, relationships have developed and turned to friendships “and that is what will get us out of the problems we are in at the moment, I think”.