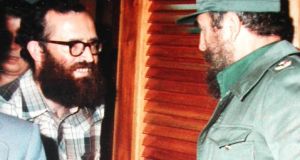 Brendan Ryan said that while Cuba was far from perfect in terms of its human rights record, its curtailment of freedoms had to be seen in a political and historical context.

Mr Ryan, a former Independent and subsequently Labour member of the Seanad, was part of an Oireachtas delegation led by the former Fine Gael TD Austin Deasy that attended an international parliamentary conference in Havana in 1981 which was addressed by Mr Castro.

Mr Ryan said the Irish delegation later had an hour-long meeting with Mr Castro conducted in Spanish through an interpreter – even though Mr Castro had good English – during which he showed a surprisingly detailed grasp of Irish politics, including the Northern Ireland situation.

“He was extraordinarily well informed and he could talk about the complexities of Northern Ireland. He didn’t see it as a simple anti-colonial struggle as some people much closer to home would present it – he didn’t claim to be offering a solution but said ‘We in Cuba recognise heroism’.”

“And I remember he came up with another quote – ‘We in Cuba also understand how different prisoners wish to be treated – here in Cuba, people insist that counter revolutionaries would be treated differently and we recognise that, we treat them worse’,” he said.

Mr Ryan said he believed Mr Higgins was “well within his rights” to recognise Mr Castro as a leading figure of the 20th century and no one should underestimate Mr Castro’s importance as a figure of inspiration for those engaged in liberation struggles throughout the world.

“Cuba is not a bastion of liberal democracy but it has many achievements to its credit and, it needs to be said, Castro gave huge inspiration to struggles for freedom all around the world – anybody who watched Nelson Mandela’s inauguration would have seen the enormous welcome he gave Castro.”

Mr Ryan said to understand Cuba under Mr Castro, and the curtailment of dissent and political opposition, it was necessary to look at the fact that, when he came to power, he found himself alone in Latin America where right-wing dictatorships and military juntas were dominant.

“Add to that was the fact that he had the most powerful country in the world intent on overthrowing him and killing him – imagine if we had the Brits trying to overthrow our government for the last 40 years and kill our leaders, would Ireland be a bastion of liberal democracy?” he added.

Mr Ryan said that while the historical and political context did not excuse some of the things done in Cuba, he nonetheless felt that, as a country, Cuba was far more progressive and tolerant than a state such as Saudi Arabia “for whom nobody apparently has a word of criticism”.

“People are a bit selective but I’ve read a good bit about human rights abuse in several countries, and Cuba is far from perfect, but it’s also far from being the worst and – unlike a lot of many of the other appalling regimes – it has done a lot of good for its citizens in terms of health and education.

“But, if I was to compare Cuba with Saudi Arabia, I would see Cuba as being so far ahead in terms of all kinds of human rights – in particular women’s rights – and it’s worth pointing out women had more rights in Cuba, including the right to choose, than in most countries in Latin America.

“They have also made progress, though they are far from perfect, on racial equality with people from African backgrounds but I am sure that before the revolution it was very much a two-tier society and those who were descended from imported African slaves were very much second-class citizens.”