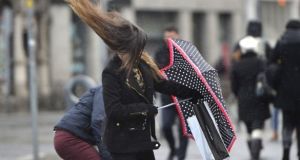 The new year is off to a blustery start, with a status yellow wind warning coming into effect at 10am.

According to Met Éireann, coastal areas will see northwesterly winds with average speeds of 50-60km/h and gusts of 90-110km/h. The alert is in place for counties Donegal, Galway, Leitrim, Mayo, Sligo, Clare and Kerry.

Early morning frost on Monday is due to clear quickly, according to the forecaster. The day will be bright and cold with blustery northwesterly winds.

Showers are likely, mostly over the west and north of the country, with maximum temperatures of 7 or 8 degrees.

Monday evening will be dry and winds will ease, but some frost will form for a time.

Winds will pick back up as Monday night goes on and rain will spread to all parts of the country. Lows of between 2 and 4 degrees are predicted.

The rain will clear the east coast on Tuesday, which will be generally drier. Tuesday evening will see more rain and highs of 8 or 9 degrees.

Wednesday is set to be cold again, with wind and heavy showers. Highest temperatures will be 7 to 9 degrees.