Events to mark 100 years since start of first World War 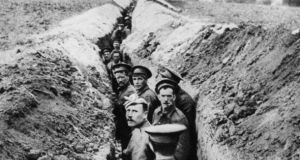 This year marks the 100th anniversary of the start of the first World War and with it comes four years of commemorations.

The war began with the assassination of Archduke Franz Ferdinand in Sarajevo on June 28th, 1914, and ended on Armistace Day, November 11th, 1918.

Some 72 present-day countries, including Ireland, took part in a conflict which still retains the power to horrify and divide opinion.

The official commemorations will begin in Sarajevo with a week long series of events culminating on June 28th. It is being partially funded by four of the main protagonists in the war, the UK, France, Austria and Germany.

France, which saw the worst fighting of the whole war including the pivotal battles of Marne, Somme and Verdun, has invited all the nations involved to join the Bastille Day parade on July 14th this year.

Belgium, which contains the killing fields of Passchendaele, Ypres and Mons, will begin its commemorations on August 4th, the day it was invaded with a ceremony at Mons which will also include representatives from the UK and Germany.

It has set out three themes for its commemoration: remembrance of all those who died, Belgium’s role as a peace maker in future conflicts and how multilaterism, most notably the European Union, has brought an end to conflicts.

The British government has announced a £50 million (€60 million) series of events which will continue for four years s.

A programme of national events spanning the four-year commemoration will begin with a special service in Glasgow Cathedral followed by a wreath-laying ceremony at Glasgow’s cenotaph for Commonwealth leaders.

At Westminster Abbey in London, a candlelit service of prayer and penitence will end at 11pm on August 4th to coincide with the moment at which Britain’s declaration of war with Germany was issued. There will also be a ceremony on Mons in Belgium where the first and last British soldiers who were killed in the war lie buried.

However, the British government’s official commemorations have divided opinion between those who believe the first World War was a senseless slaughter with “lions led by donkeys” and those who feel it was a justified conflict given Germany’s aggressive militarism and invasion of neutral Belgium.

A group calling itself No Glory has been set up to counter what it believes will be a celebration of British militarism that will gloss over the horrors of the war.

The film director Ken Loach, actors Jude Law, Alan Rickman and Timothy West are among those who have signed a letter saying that the war should be remembered as a “military disaster and a human catastrophe”.

They describe it as a “war that was driven by big powers’ competition for influence around the globe, and caused a degree of suffering all too clear in the statistical record of 16 million people dead and 20 million wounded.

“In 2014, we and others across the world will be organising cultural, political and educational activities to mark the courage of many involved in the war but also to remember the almost unimaginable devastation caused.”

Memories of the first World War will be more muted in Germany and Austria, the two vanquished allies. Germany will be attending all the major commemorations but has no major programme of its own other than the opening of a joint French-German museum at the site of the Hartmannsweilerkopf battlefield in French Alsace, an area which was fought over by both countries on several different occasions.

In Ireland the Government has signalled its determination to properly remember the 250,000 Irish soldiers who fought in the war.

The first World War will be fully incorporated into the Government’s decade of centenaries from 2012 to 2022 with a full list of events to be decided.

A new cross, commissioned by the Glasnevin Trust and the Commonwealth War Graves Commission, will be unveiled at a service at the Irish National War Memorial Gardens in Islandbridge on August 4th.

There will also be an Irish presence in Mons, Belgium where the first major battle of the first World War on the western front will be marked.

The passage of the final Home Rule Bill in July 1914 and the famous Woodenbridge speech given by John Redmond, which urged Irish volunteers to sign up to fight for the British army, will also be examined in detail.

Mr Deenihan said all first World War commemorations will be co-ordinated with the Northern Assembly. He maintained co-operation between North and South in relation to the commemorations has been “respectful and inclusive”.

“It is a great opportunity to show our shared heritage on this island.”

Among the events listed for commemoration is the 100th anniversary of John Redmond’s famous speech at Woodenbridge, Co Wicklow, in which he urged the Irish volunteers to fight ‘in defence of right, of freedom, of religion in this war’.

Other significant anniversaries to be marked this year include the Howth and Larne gun running incidents, the Curragh Mutiny and the millennium anniversary of the Battle of Clontarf.