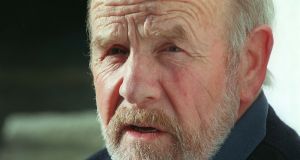 The funeral of Eugene McCabe was told that his ‘love of literature, or writing, was matched only by his love of nature’. Photograph: The Irish Times

Renowned writer Eugene McCabe was defined by his “love of nature,” his funeral Mass in Clones, Co Monaghan, heard on Saturday.

McCabe, a playwright and one of Ireland’s leading contemporary writers, died aged 90 in recent days.

Due to coronavirus limits on gatherings, his funeral in the Sacred Heart Chapel, Clones, was restricted to family and close friends but the service was streamed online.

Born in Glasgow in 1930, he grew up near the Border in Clones, Co Monaghan on the family farm. He would work as a farmer until 1966, at which point he focused full-time on writing .

Delivering the funeral Mass, Monsignor Richard Mohan said it was on the farm where McCabe “developed a knowledge and love for the land.”

“The Border and its effects on people’s personalities and lives became in one way or another themes in his writing,” Msgr Mohan told those gathered.

“His love of literature, or writing, was matched only by his love of nature,” he said. The writer was always “the boss” on the farm, he said.

McCabe was “a man who relished good conversation,” and was remembered “as a family man,” the Mass heard.

The writer had made “no secret” of his pleasure in living to 90 years of age, or as he would put it “four score and ten,” Msgr Mohan said.

He is survived by his wife Margot, his daughter Ruth, three sons Marcus, Patrick and Stephen, and sister Margaret.

Reacting to the news of his death earlier this week, President Michael D Higgins described McCabe as a writer who “was able to capture the complexity of differing viewpoints, and particularly of those confronted with bigotry and fundamentalism”.

McCabe made his name as a playwright with his breakthrough play King of the Castle in 1964, which offended the Catholic group the League of Decency .

A stern critic of violent extremism and sectarianism, influenced by a lifetime spent living on the Border, he wrote a trilogy of hard-hitting screenplays about the Troubles for RTÉ in the early 1970s: Cancer, Heritage and Siege.

His 1992 novel Death and Nightingales, described by author Colm Tóibín as “one of the great Irish masterpieces of the century” was recently adapted for television by the BBC.

As well as writing a series of highly acclaimed short story collections, most recently Heaven Lies about Us (2005), he also wrote for children and the nonficiton work, Shadows from the Pale: Portrait of an Irish Town (1996).