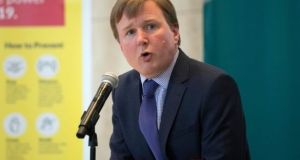 Dr Cillian de Gascun believes Ireland is still in the first wave as there had not been any significant change in the virus. Photograph: Colin Keegan/Collins

A further 142 cases of coronavirus were reported in the State on Saturday as one of the country’s leading public health experts warned a second national lockdown could not be ruled out if there was a surge in Covid-19.

Dr Cillian de Gascun, the chairman of the National Public Health Expert Team (NPHET) advisory group said the reintroduction of stay-at-home restrictions would be avoided “if at all possible” but they had been shown to work in suppressing the spread of the virus.

It followed a warning by the Minister for Health Stephen Donnelly on Wednesday that the country was close to a second national lockdown because the State was at “a tipping point”.

NPHET reported a further 142 cases of coronavirus and no further deaths on Saturday.

This is the seventh day in a row there has been no additional coronavirus-related deaths reported.

Some 32 of the cases are linked to an outbreak or were close contacts of a previous confirmed case, and 19 of the cases arose from community transmission.

Fifty-nine of the cases were in Dublin, 20 in Kildare, which remains under a local lockdown, and 14 cases were in Donegal and Limerick. There were eight confirmed cases in Wexford, and six in Tipperary.

The remaining 21 cases were spread across counties Carlow, Clare, Cork, Kerry, Kilkenny, Laois, Louth, Mayo, Meath and Wicklow. Over the last two weeks there has been confirmed cases in every county in the country except for Leitrim.

In a statement, acting chief medical officer Dr Ronan Glynn said Saturday “marks six months since our first case of Covid-19. It has been a very difficult time for many and few have been left untouched in some way by the negative effects of this pandemic”.

Dr Glynn said during that time “our frontline workers have stepped up again and again. But underpinning it all has been each person playing their part by making the right choices, many times, each day. Together, we have broken the chains of transmission and flattened the curve,” he said.

“As cases rise again, it is these same behaviours that will once again make the difference, protecting ourselves, our families and our communities,” he said.

Speaking on RTÉ Radio One’s Brendan O’Connor Show on Saturday, Dr de Gascun acknowledged the country was at a “critical phase” as the Government waited to see the impact over the next week of additional national restrictions on the gathering of people imposed last week.

“It’s really important that people continue with the enhanced measures and the enhanced public health guidelines,” said Dr de Gascun, who is also director of the National Virus Reference Laboratory.

However, he said the reintroduction of a national lockdown could not be ruled out. “It’s a tool in the armoury that you never exclude definitively.”

Dr de Gascun acknowledged that a lockdown while effective in controlling the virus had a very significant impact on the Irish economy and people’s mental health.

He said NPHET was very conscious that the planned last phase of the reopening of the economy, which included pubs, had not been able to go ahead because of Covid-19 levels in the community.

Dr de Gascun said the way people went to pubs in the past was one of the highest risk environments for the spread of the virus but that there might be measures that the industry could put in place to reopen safely.

On Friday, the Government agreed to give gardaí greater enforcement powers against pubs that do not comply with Covid-19 public health guidelines.

Tánaiste Leo Varadkar said there was a €16 million package being made available for pubs that were being prohibited from reopening next week.

Minister for Justice Helen McEntee said on Friday there would be enhanced enforcement powers for pubs and restaurants after an increase over the summer in the number of non-complaint premises.

She said with the sanction of a superintendent a gardaí can order the closure of a pub for one day, and if there is still no compliance with this seven days, and then 30 days.

Mr Varadkar said he could not say with any certainty whether pubs would reopen this year.

Further regulations are being considered by the Government which would see workers in premises that serve drink and food be obliged to wear masks.

The Cabinet also agreed to ask the Attorney General to examine options for further regulating house parties. Under the proposals discussed by the Cabinet on Friday afternoon, it will be an offence to organise or attend a gathering in a private house with more than six visitors either indoors or outdoors. This measure was introduced as a guideline last week.

Meanwhile, the incidence of Covid-19 cases in the Republic has surpassed the level in Sweden for the first time since the start of the pandemic.

Updated figures published by the European Centre for Disease Prevention and Control (ECDC) on Saturday show that the infection rate in Ireland over the past 14 days is 32.3 per 100,000 compared 28.9 per 100,000 in Sweden.

Health authorities have focused on figures from Sweden as the country adopted a softer approach to combating the virus, although it has experienced comparatively higher infection rates and death rates than neighbouring countries like Norway and Finland.

The highest current rate of infection is in Spain where there are 205.5 cases per 100,000 over the past fortnight, with the heaviest concentrations in the northern part of the country.

Other countries with current high infection rates are Romania, Malta, Croatia and France.

Almost 2.17 million cases of Covid-19 have been reported in EU/EEA countries and the UK to date.

Ireland is ranked 12th in the most number of cases, although it is only the 22nd most populous nation among the 30 European countries whose figures are collated by the ECDC.

Ireland still in the first wave

Asked where Ireland was in the course of the pandemic, Dr de Gascun said he thought the State had interrupted the first wave through the introduction of stay-at-home restrictions and “the fantastic effort by everyone in the country”.

While it was difficult to know exactly from a virology perspective, he said he believed Ireland was still in the first wave as there had not been any significant change in the virus.

Dr de Gascun said it was “disappointing but not hugely surprising” that the summer weather did not have any great effect on the virus.

“So really people’s behaviour is what we have to count on to control it for the coming months until we do have an effective treatment or hopefully an effective vaccine in the next year,” he added.

He praised the public for taking the public health message to heart so well and for “continuing to do the right thing the majority of the time.”

Although a significant second surge of Covid-19 could be expected in the winter season, Dr de Gascun expressed confidence that the ongoing use of physical distancing, hand hygiene and wearing face masks would have an impact on all respiratory viruses, including the flu, over the coming months.

He pointed out that Australia had already experienced a very mild influenza season because of all the public health measures that had been in place to combat Covid-19.

“I think it’s important that we reassure people, to a degree, that we can control this,” he added.

Dr de Gascun said there was no major difference between a zero Covid policy - the elimination of the virus rather than its suppression - and the one being pursued by the Government.

“Ultimately you want to suppress the virus as much as possible in the community while allowing people to get back to school and to get back to work and to protect our vulnerable,” he said.

As Ireland was an open economy which was impacted by the stay-at-home restrictions, Dr de Gascun said the aim was to reopen society as much as possible.

However, he stressed that people needed to be aware that aspects of daily life needed to be done in a different way and that such a required change in behaviour that could last for several years.