Vintners’ groups say Government’s support package is a 'slap in the face'. 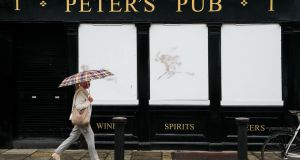 The Cabinet decided on Friday that ‘wet’ pubs – ones which do not serve meals – will not be permitted to open next week. Photograph: Gareth Chaney/Collins

Tánaiste Leo Varadkar has said there is no guarantee pubs will reopen this year as industry groups strongly criticised the Government’s new €16 million support package, describing it as a “slap in the face”.

The Cabinet decided on Friday that “wet” pubs – ones which do not serve meals – will not be permitted to open next week, before unveiling a package of increased cash grants along with a waiver on court fees for the renewal of pub licences.

The Government has also agreed to introduce regulations which would make it a civil rather than criminal offence to hold a gathering of more than six people in a private home either indoors or outdoors.

Minister for Justice Helen McEntee said the Cabinet felt a “penal provision” or criminal sanction could be viewed as extreme.

However, sources have admitted there will be effectively no regulation of house parties and no penalties for those who have more than six people in their home.

It is understood Ministers became “spooked” by the public reaction to news they were considering making such gatherings a criminal offence and decided not to proceed with the plans.

Speaking after the Cabinet meeting, Mr Varadkar said the Government intended to work with the State’s public health team to draft protocols which might allow pubs to reopen but he could not give any specific dates for this.

“Ireland is the only country in Europe where wet pubs are fully closed. In most countries they are open with some restrictions and we are examining whether that can be done,” he said.

The Licensed Vintners’ Association described the Government’s €16 million package as a “slap in the face” and said it was “crumbs” in comparison to what the industry needed.

“We had been calling for a plan to support the pub sector since mid-July and this is all the Government managed to put together. It is disappointing in the extreme,” said chief executive Donall O’Keeffe.

The package is built on existing measures launched by the Government as part of its July stimulus plan. The so-called restart grant has been topped up by an additional 40 per cent, with businesses now eligible for grants of between €5,600 and €35,000.

In addition to the cash grants, the Government announced a waiver of court fees and associated excise and stamp duties relating to the renewal of pub and liquor licences this year. The various court fees covered range from €150 to €655.

Mr Varadkar said the package “does not necessarily need to be the end of things”, adding that “if the closure turns out to be prolonged, it is something we can revisit again at budget time”.

The Cabinet also approved new laws, which must be passed by the Oireachtas, which would give gardaí the power to close down pubs or restaurants which do not comply with public health guidelines. Closures of between one and 30 days can be sought, depending on the level of non-compliance.

There will be a sunset clause in the proposed Bill which would see the measures cease this November.

Meanwhile, Taoiseach Micheál Martin, Mr Varadkar and Green Party leader Eamon Ryan met on Friday night to discuss who the Government plans to nominate to the European Commission in light of the resignation of Phil Hogan.

Fianna Fáil Minister for Public Expenditure Michael McGrath said that “no one party owns the position”.

“It is an appointment by the Irish Government. I think the most important thing is that we get the best candidate, that we get somebody who can represent Ireland competently at the European Commission and that is really the sole criterion,” he said. “There is no battle between parties in relation to this issue.”