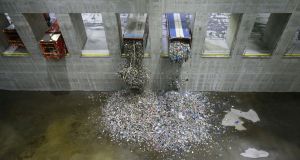 There are reports that 11 people have been injured following an incident at the Poolbeg Incinerator this morning. Photograph: Nick Bradshaw/The Irish Times 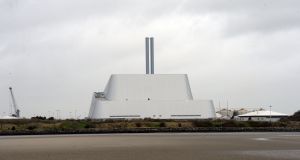 There are reports that 11 people have been injured following an incident at the Poolbeg Incinerator this morning. Photograph: Nick Bradshaw/The Irish Times

Eleven people were hospitalised after a small amount of lime was released inside the flue gas treatment area at the Poolbeg Incinerator in Dublin on Wednesday night.

John Daly, managing director at Covanta Ireland, the company that operates the incinerator, said the accident happened at 10.45pm . When staff felt they had “ingested” the lime they went to St Vincent’s Hospital, he said.

“An incident took place where some hydrated lime was released from the silo into what we call the fule gas treatment area of the building. In that particular area there was about 30 guys working, taking down some scaffolding,” he told RTÉ’s News at One.

“Eleven of them were involved in the cloud of lime rising up, they felt, some of them had ingested it so what happened was they left here, they went down to our Medicon site, they had a shower, washed their eyes, that type of thing.”

He added: “Then they went in their own cars or some other cars over to St Vincent’s for the medical survey there. Nine of them were released more or less over the following two hours and two unfortunately have been kept in overnight for observation.”

A combustion unit that was operating at the time was shut down and the lime was contained within the building and did not escape into the environment, Covanta said. Mr Daly added that it appeared the release of the lime was due to a problem with a door seal.

Both the EPA [Environmental Protection Agency] and the Health and Safety Authority were notified of the incident.

“The safety of our employees and contractors is of utmost importance to Covanta and we are investigating the incident thoroughly,” said a spokesman for Dublin Waste to Energy Ltd.

The HSA had an inspector on site on Thursday morning and said their investigation is ongoing.

Residents in Ringsend area have expressed concerns over the safety of the Poolbeg Incinerator, after 11 workers were taken to hospital following the incident. One resident living on a small road near the plant’s entrance, who asked not to be named, has said her family have decided to move house following the opening of the Poolbeg incinerator. The mother of the young family said safety fears over living beside the incinerator, as well as an increase in other heavy machinery works around the Dublin port area led to them deciding to sell their house and move.

Another local Ringsend resident Maria Dunne, said there was a lot of concern in the area. Ms Dunne lives in a small row of houses near one of entrances into the incinerator plant. “I am very nervous about it. We’ve no plans to move, we’ve two small children, so it is a worry. There are other parents on the street who would have a lot of concern” she said. A spokeswoman from the Environmental Protection Agency said they are “satisfied that there was no danger to the public or local community from the release”.

Green Party leader Eamon Ryan said the incident was “extremely worrying” and called for the incinerator to close until a full investigation had been carried out.

“There will be real concern by people in the area after this. It is all part of the wider concern we’ve had for years about incineration. It should not open until the investigation is completed,” he told RTÉ’s Today with Sean O’Rourke show.

The Dublin Bay South TD said he wanted Covanta, the EPA and local groups to come before an Oireachtas Committee to discuss concerns.

Hildegarde Naughton, Fine Gael TD and chairwoman of the Oireachtas Committee on Communications, Climate Action and Environment, said the incident had “ramifications for wider public safety”. “While my primary concern is with those injured in the incident, it also has ramifications for wider public safety...In that light, I will await the report of the Health and Safety Authority and the EPA before considering what further steps might be taken in relation to the oversight of the facility,” the Galway West TD said.

The plant was first proposed in 1997 but did not secure planning permission until 2007. An Bord Pleanála received about 2,500 objections to the application for permission, including one from former Green Party minister for the environment John Gormley.

Construction of the plant began in 2014 and took about three years to complete. The incinerator took its first deliveries on April 24th.

Why does the Poolbeg incinerator use hydrated lime?

The gas accidentally released in the plant was hydrated lime. The lime gas is used to treat the exhaust fumes the plant releases into the atmosphere after waste is incinerated. The lime substance is commonly used in incinerator and waste plants around the world. The hydrated lime removes harmful chemicals from the plant emissions before they reach the atmosphere, which would otherwise cause pollution. The exhaust gas generated from burning waste at the incinerator plant contains multiple harmful toxins and chemicals such as acid gases and gas released from metal materials, which needs to be removed before the gas can be emitted into the atmosphere.

In May 2016, Covanta, the company running the Poolbeg incinerator had to close down part of an incinerator plant they run in Canada, near Toronto. Tests showed the emissions from one of the plant’s stack had exceeded emission safety levels. The plant’s emissions of dioxins, which are toxic by-products produced from the burning of waste, were nearly 13 times the limit set by the Canadian ministry of the environment