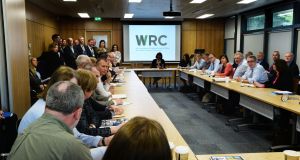 Unions and the Government have agreed a pay deal that will run for three years. Gardai, military personnel and prison officers, who have faster accruing pensions, will benefit least from the proposed new agreement. Photograph: The Irish Times

About 250,000 State employees will receive pay improvements of between 6.2 per cent and 7.4 per cent as part of a new three-year extension of the existing Lansdowne Road agreement.

It is understood the deal, if accepted, will cost the exchequer €880 million over three years.

Under the proposed deal, a further 50,000 civil and public service staff recruited since 2013 and who have a less generous pension scheme will receive pay improvements of 7 per cent and 10 per cent over the three -year period.

About 23,000 State employees such as gardaí, military personnel and prison officers, who have faster accruing pensions than other groups, will benefit least from the proposed new agreement.

The proposed deal, which will have to be considered and voted on by individual trade unions and staff associations, involves both increases in pay and changes in pension contributions.

From January 1st, 2018 public service staff will receive a 1 per cent pay rise with a further 1 per cent increase to follow on October 1st next year.

The existing public service pension levy, which was introduced as a financial emergency measure in 2009 following the economic crash, is to be converted into permanent additional superannuation contribution on a three -tier basis which is aimed at reflecting differing pension benefits.

For staff appointed before 2013 the rate of the new contribution will be the same as the pension levy at between 10 and 10.5 per cent depending on salary levels.

For staff appointed since 2013 and who are covered by the less -generous career average scheme, the contribution will be set at 6.66 per cent for those earning between €32,000 and €60,000 and 7 per cent for on salaries above that level from January 2019.

The proposed agreement would mean overall that those on medium range salaries of between €55,000 and €60,00 who were appointed before 2013 would benefit by just under €4,000 over its three-year term.

For those appointed since 2013 who are covered by the less -generous pension scheme, the benefits will be higher - about €5,487 over the lifetime of the proposed accord.

Those with fast accruing pensions will benefit least. They would receive the pay increases proposed but would not gain from the pension contribution reforms, a relative loss of €575.

The highly controversial requirement for staff to work additional unpaid hours is to remain in place. However staff will be given two opportunities, next year and in 2021 to revert back to their previous shorter working week on condition that they agree to a corresponding pay cut.