Body of Arklow ‘hit and run’ victim may have been moved 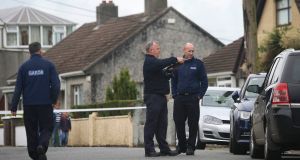 Forensic gardaí at the scene of a fatal collision where a man in his 40s was killed at Coolgreany road, Arklow. Photograph: Garry O’Neill

Gardaí investigating the death of a man in a suspected hit and run incident in Co Wicklow have found debris from a vehicle at a second scene searched as part of their investigation.

The body of Declan Kelly (49) was found on the Coolgreany Road on the outskirts of Arklow town in the early hours of Monday. It is believed that he was struck by a vehicle shortly after 2.20am.

A second scene about 2km away on the road between Arklow and the townland of Johnstown was sealed off on Tuesday and a full forensic examination was conducted.

Debris from a vehicle was found and gardaí are tyring to establish if another vehicle was involved in the death of Mr Kelly or if this material was from an unrelated incident.

A Ford vehicle was also seized on Tuesday and forensically examined and a man who presented to Arklow Garda station was questioned. Gardaí have gone through CCTV footage from surrounding areas in an attempt to piece together Mr Kelly’s final movements.

Detectives are still trying to determine what occurred on the night in question and have not ruled out that the deceased’s body was moved at some stage.

Mr Kelly’s family hails from Ballyduff where they have a farm and was well known in the farming industry through his work as a cattle hoof trimmer.

An incident room has been established at Arklow Garda station and anyone with information is asked to contact (0402) 26320.