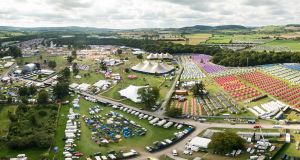 The Electric Picnic in 2020 will take place from September 4th to 6th at Stradbally which has been its home since the beginning of the festival in 2004 when the first festival had a capacity of 10,000. Photograph: aerial.ie

The Electric Picnic capacity for next year’s festival will be increased to 70,000 making it one of the biggest music festivals ever held in Ireland.

A licence has been granted by Laois County Council to expand the festival further from its 55,000 capacity last year.

It means that the capacity of the Electric Picnic has more than doubled since 2013 when 32,000 people attended the festival.

Festival promoter Melvin Benn said the increase in the size of the festival is in response to “unsatiated demand” from the public as the Electric Picnic has sold out in recent years shortly after tickets have gone on sale.

“So many more people wanted to go the event. This will be wonderful for them,” he said.

“It will go some way if not all the way to meet the demand for people who want to be at the festival.”

Mr Benn added that Laois County Council had approved his plans to increase the size of the main arena at the Electric Picnic to accommodate the larger crowds.

He also stated that the traffic plan had been approved by An Garda Síochána and he anticipated that the extra traffic will be absorbed by the 10,000 fans who are expected to arrive on Thursday night.

The Electric Picnic in 2020 will take place from September 4th to 6th at Stradbally which has been its home since the beginning of the festival in 2004 when the first festival had a capacity of 10,000.

Mr Benn said he did not believe that fans would conclude that expanding the festival capacity to 70,000 will make it too big. “Nobody says that about Glastonbury and it is twice the size of the Electric Picnic,” he said.

“Glastonbury has a huge family activity area and kids area. I want to create more areas.”

There will be changes to the arena next year with the Mindfield section moving further away to accommodate the expansion in the size of the main arena.

The popular Body and Soul section is to be replaced by a new Mind and Body section.

There will be a new section called FishTown which will feature singer Jerry Fish and his Electric Sideshow.

Tickets go on sale on Monday priced at €290 for earlier arrivals on Thursday, €260 for a weekend pass from Friday and €100 for a day pass on the Sunday.

The line-up for the 2020 festival will not be announced until March.

1 Aer Lingus staff say they are living in ‘near poverty’ and unable to cover rent
2 Covid-19: Warning of similar measures for other counties as Donegal moves to Level 3
3 Donegal to move to Level 3 Covid-19 restrictions, Taoiseach confirms
4 Covid-19: Three more deaths and 324 new cases in State as ‘green list’ of countries reduced
5 Next 10 days critical in fight against Covid-19 in Cork, says adviser
Real news has value SUBSCRIBE