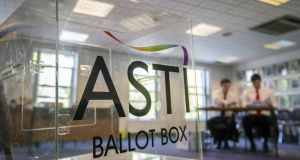 The union said that 93 per cent of members had voted in favour for directing its members to only attend meetings which were in compliance with the agreed arrangements. Photograph: Brenda Fitzsimons/The Irish Times

The country’s biggest secondary teachers’ union is likely to direct its members to only only attend meetings relating to junior cycle reforms which are scheduled to take place during the normal school day.

Members of the Association of Secondary Teachers Ireland (ASTI) voted to authorise the union to issue a directive on the scheduling of Subject Learning and Assessment Review (SLAR) meetings.

The ASTI said on Wednesday that it had undertaken a ballot on the timing and scheduling of SLAR meetings “because some schools have consistently proposed that the meetings be held outside normal school tuition hours”, contrary to an agreement with the Government on junior cycle reforms.

The union said that 93 per cent of members had voted in favour of the ASTI directing its members to only attend SLAR meetings which were in compliance with the agreed arrangements. It said the turnout was 55 per cent.

“The appendix to the Junior Cycle Reform Joint Statement on Principles and Implementation states that subject learning and assessment review meetings should be scheduled within a school’s timetable and that a limited number of meetings may run beyond school tuition hours for some of the duration of the meeting “,the ASTI said

ASTI president Deirdre Mac Donald stated: “Teachers in schools all over the country are saying that they are overloaded because of additional work and responsibilities, multiple new initiatives, and a lack of resources and investment in second-level education.

“This ballot sends a clear message that unilateral changes to agreed work arrangements which cause a deterioration in teachers’ terms and conditions will not be tolerated.”