Easter Rising: Most Moore Street terraced houses not there in 1916

The Save Moore Street Campaign have called for the preservation of the entire street after recent design concept proposed to demolish two buildings on the terrace. Video: Ronan McGreevy/ Enda O'Dowd 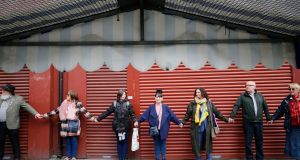 A survey of terraced houses in Moore Street associated with the Easter Rising has shown most of the buildings were not there in 1916.

The Government has designated numbers 14 to 17 Moore Street a national monument as these buildings were the last rebel holdout during the Rising. It will be developed into a Rising visitor centre.

Campaigners want the entire terrace of houses from 10 to 25 preserved as a battlefield site. But developer Hammerson wants to partially knock down number 18 and demolish 19 to make a pedestrian walkway linking O’Connell Street and Moore Street.

The group was established in 2017 to chart a way forward for Moore Street and it involves politicians and relatives of those who fought in 1916. It is due to issue its recommendations at the end of the month.

The survey, seen by The Irish Times, was commissioned to examine historical records concerning the provenance of buildings at 10 to 25 Moore Street. It supports previous arguments by the State and Hammerson that quite a few of the disputed buildings were not there during the Rising.

The survey states that 10 Moore Street, where the rebels gained entry through the gable end on Henry Place, is “much altered but historically significant”. However, the properties adjacent to it at 11 to 13 are post-1916 new builds. On the other side of the national monument, they have concluded that 18 and 19 were in ruins in 1916.

This is according to Thom’s Directories and contemporary property valuations along with Bureau of Military History witness statements that indicate rebels crossed waste ground at this location.

In 2017 the Moore Street Consultative Group published a report, Securing History, that envisaged retaining the entire terrace as an “integral” part of the street redevelopment.

On Sunday protesters marked 10 years of the Arms Around Moore Street campaign. This was started to preserve the terrace from plans by previous developer Chartered Lands to develop an enclosed shopping centre around it.

Campaigner Frank Allen said the Hammerson design concept would “cut into the battlefield site. We would be most unhappy with it, but we want the [consultative] process to continue. It appears from the release that Hammerson are the only ones with a vision for the site, but we put in submissions for a historical and cultural quarter.”

He said Moore Street campaigners want the terrace presented as it was in 1916. “It’s very early days. It [the Hammerson design concept] can be put forward as a discussion document, but no one party will walk in with a plan and we will vote yes or no to it. A new plan has to emerge with the agreement of all if this process is going to be successful.”

Former lord mayor of Dublin Michéal Mac Donncha said the Hammerson proposal was a “step forward from the Chartered Land plan”. Mr Mac Donncha is a member of the Moore Street advisory group set up since the Securing History report was published.

1 Ireland enjoys hottest day of the year for second time this week
2 Police officer ‘kicked in the face’ while clearing crowd from beach
3 Quarantine will cease within fortnight, Ryanair CEO claims
4 Irish tourists excluded from visiting Greece as country begins its tourism season
5 George Floyd death: Teenager dies in clashes as protests spread across US
Real news has value SUBSCRIBE